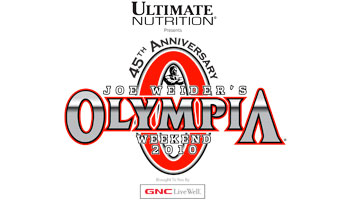 Over a two-day span during Olympia Weekend 2010, the world will find out which IFBB Pro League athlete is pound-for-pound the strongest bodybuilder on the planet at the first annual Olympia Pound4Pound Challenge! Anyone with a pro card is eligible to enter. Here’s all the in you you need:

Send an e-mail to [email protected] that contains the following information:
Name
DOB
How you qualified to become an IFBB Pro League athlete (which show did you win?)
Weight
Height
Basic info (address, e-mail, phone number)

— Only FULL reps will be counted (which will be determined by an on-site judge)
— Belt, wraps and straps are all permitted

The top five competitors in each lift will receive the following points. A tie in reps will result in both competitors being awarded a point. The highest point total at the end of all four lifts will determine the overall winner. In the case of a tie, the total number of reps will determine a winner.