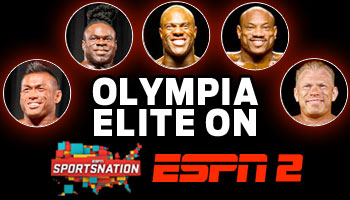 Heath, Greene, Jackson and more on ESPN2 on Wednesday

With the 2010 Mr. Olympia, the biggest bodybuilding spectacular on the planet, speeding toward us at warped speed, “The Worldwide Leader in Sports” has taken notice.

On Wednesday at 4 p.m. EST, ESPN2’s SportsNation will showcase the IFBB Pro League’s elite — Phil Heath, Dexter Jackson, Kai Greene, Hidetada Yamagishi and Dennis Wolf — as they discuss NFL football and, of course, the 2010 Mr. Olympia on September 24-25. It’s an incredible opportunity for the sport of bodybuilding to reach a broader audience while offering a handful of the finest pros in the game a well-deserved spotlight on national TV.

Said Heath, “I have a chance to be recognized as a top bodybuilder by ESPN, and it’s definitely a moment I’ll never forget. I’m very excited to represent the IFBB Pro League and its fans in something that hasn’t been done in more than a decade. I’d like to thank FLEX, Muscle & Fitness and ESPN for making this Big Kid’s dream come true!”

Added Jackson, “It’s awesome, man. I can’t even tell you how cool this feels. I’m a sports fanatic, so anything we talk about, I’m down. I’m ready to rock!”