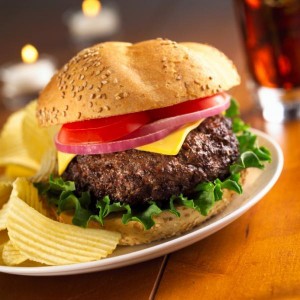 Maybe that juicy steak you ordered isn’t a heart-attack-on-a-plate after all.
A new study from the Harvard School of Public Health suggests that the heart risk long associated with red meat comes mostly from processed varieties such as bacon, sausage, hot dogs and cold cuts and not from steak, hamburgers and other non-processed cuts.

The finding is surprising because both types of red meat are high in saturated fat, a substance believed to be partly responsible for the increased risk of heart disease. But the new study raises the possibility that when it comes to meat, at least, the real bad actor may be salt. Processed meats generally have about four times the amount of salt as unprocessed meats.

Processed meats such as bacon and sausage have four times the amount of salt as steak and hamburgers.

In a report that pooled data from 20 different studies from around the world, the researchers found that daily consumption of about two ounces of processed meat was associated with a 42% increased risk of heart disease and a 19% heightened chance of diabetes. By contrast, a four-ounce daily serving of red meat from beef, hamburger, pork, lamb or game wasn’t linked to any increased risk of heart disease. There was, however, a small, but statistically insignificant risk of diabetes.
While the study is far from definitive, researchers said the findings suggest that people, especially those already at risk of heart problems or with high blood pressure, should consider reducing consumption of bacon, processed ham, hot dogs and other packaged meats that have a high salt content. Salt increases blood pressure, a major risk factor for cardiovascular disease.
“The conventional wisdom is that red meats have higher saturated fat and cholesterol levels,” factors that have made all red meats potential culprits in raising the risk of cardiovascular disease, said Renata Micha, a research fellow in the Harvard School of Public Health’s epidemiology department. “But when you try to separate processed from unprocessed meats, you get an entirely different picture.” She is lead author of the study, which appears in Tuesday’s issue of the American Heart Association journal Circulation.
Red Meat Redeemed?

Some types of red meat don’t elevate heart disease risk, according to a new study. Here’s how various meats compare:

Based on information about meat products sold in the U.S., levels of saturated fats are similar in processed and unprocessed meats, while steak and other red meats have on average slightly higher levels of cholesterol, the researchers found. But sodium levels average about 622 milligrams per two-ounce serving of processed meat, about four times the 155 milligrams found in steak, hamburger or pork. Other preservatives, called nitrites, were also higher in the processed meats. In some studies, nitrates have been shown to interfere with the health of blood vessels and the body’s ability to process glucose.
None of this suggests that steak is a new health food. While red meat wasn’t linked to an increased risk of heart disease in the study, it didn’t lower it either. Other research suggests frequent red meat consumption is associated with increased risk of colon cancer. The new report didn’t look at cancer effects.

New research on red meat shows that eating steak is okay, just hold off on the sausages and bacon. WSJ’s Ron Winslow discusses.

The report is the second meta-analysis in recent weeks to question just how much of a culprit saturated fats are when it comes to cardiovascular risk. In March, a meta-analysis (involving 21 different studies) by a team headed by Ronald Krauss at Children’s Hospital Oakland Research Institute, Oakland, Calif., found that intake of saturated fat wasn’t linked to a statistically-significant increased risk of heart disease, stroke or cardiovascular disease.

“There is growing evidence that it’s not which nutrient we eat, but the type of foods we eat that is important,” said Harvard’s Dr. Mozaffarian. “We have to get away from trying to micromanage nutrients and look at the health quality of foods.”

That a good cut of red meat might be healthier than a heavily processed serving of other meat, he added, “is intuitive to most Americans. Maybe the science is catching up with the intuitive sense.”