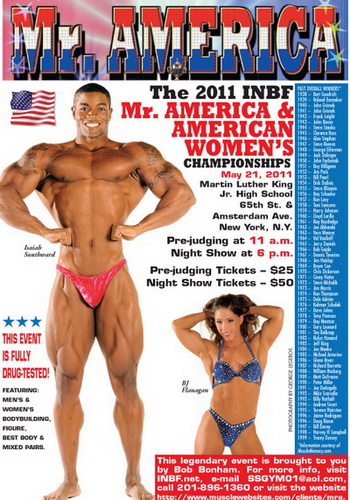 Bodybuilding and the title of Mr. America go hand in hand. Dating all the way back to 1940 (the first year that the actual title was used, contest held since 1938), the Amateur Athletic Union held the annual competition that was the pinnacle of bodybuilding. The list of winners reads like a ‘who’s who’ of the early days of the sport. John Grimek, Clarence Ross, Steve Reeves and George Eiferman all took home first place during that initial decade.

Now it is once again part of the bodybuilding schedule as an all-natural show sanctioned by the INBF. The man responsible for doing all of this is none other than Bob Bonham of Strong and Shapely Gym in East Rutherford, New Jersey. Bonham has penned numerous articles for the various bodybuilding publications over the years and is well known throughout the industry.

The 2011 INBF Mr. America contest will be held on May 21 at Martin Luther King High School located at Amsterdam Avenue and 65th Street in New York City. The pre-judging begins at 11 AM ($25 tickets) and the evening show is at 6 PM ($50).

For more information, contact Bob at [email protected] or (201) 896-1360. Be sure to check out the official contest website.