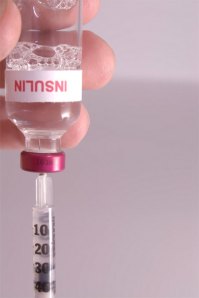 This is one of my Favorites!!

Ok, lets have a look at insulin.
Its highly anabolic and non-androgenic, and in case some of you are in the dark (I’d like to think we’re all clear on anabolic versus androgenic, but ya never know) I’ll briefly touch on the subject before diving in… if youre ok on anabolic/androgenic concepts, skip to the INSULIN part…

ANDROGENIC is basically defined as pertaining to male sex characteristics.

“Steroids” are actually called “Anabolic Androgenic Steroids.” They accomplish “anabolism” through “anabolic” pathways, some being more androgenic (testosterone esters) and some less (winstrol, anavar, primobolan, ect…).
Most often, with reduced androgenic properties comes reduced anabolic properties, but it isnt always cut and dry. If anyone is interested I’ll go into it another time, but lets head toward the insulin topic.

WHY IS INSULIN ANABOLIC

So why is insulin anabolic then? Insulin is a partitioning agent. A “shuttle” if you will.
Picture insulin as a bus. Nutrients board the bus, and insulin pulls away and drops off the nutrients at the proper bus stop. That is basically what it does, and for all intents and purposes that is everything you need to know to understand how it works.
So by insulin shuttling these nutrient where they need to go, it enables anabolism and is therefor anabolic!

WHY NOT JUST TAKE CARBS TO RAISE INSULIN

Well, the amount of carbs you would need to take in to increase natural insulin levels to the degree a 10 i.u. shot would would be far more dangerous than using insuiln (and using insulin is NOT that hard OR dangerous).
Carbs at that level would eventually lead to diabetes and fat gains.
If insulin is a bus taking nutrients where they need to go, then exogenous insulin is a bullet train! It can hold far more nutrients than a normal naturally produced burst of insulin can, and it works quicker. Exogenous insulin is the most efficient way to accomplish glycogen overcompensation, period.

WHAT KIND DO I TAKE

Im a major supporter of fast acting insulin. The faster the better!
Currently he fastest acting insulin available is Humalog. It is active in 15 minutes, peaks in 1 hour and clears the system around 2 hours.
Next would be Humalin-R. It is active in about 30 minutes, peaks at the 2 hour mark, and clears the system at the 4 hour mark.
“Biophasics” are mixtures of fast and slow acting insulins, but are not the best choice in my opinion, due to an active dose being in you throughout the day. The reason you dont want that will be covered in the “HOW DO I USE IT” section.
There are also Humalin-L and Humalin-S, but they are long acting, and are no more use to me than the Biophasics. There are also porccine and bovine derived insulin, but I am against injecting animal derived substances.

WHEN (AND HOW MUCH) TO USE

Im going to assume we want to avoid any fat gains at all. Even bulking I dont like to gain any unneccesary fat, so Im going to disuss it from that stand point.
The ultra conservative time to use insulin is post-workout. Most people who are concerned about fat dont go over 10 i.u. as a total dose.
Some people us it on waking, before breakfast, since your body is in a basically carb depleted state. Its the kind of thng you have to try for yourslef, and if it works for you, do it. If you thnk youre gaining fat, stop. BUT! Dont start it at both times at once. Make sure you get your post workout dosage worked out and that you know it is not causing you any fat gains before you try pre-breakfast shots. That way you can take out all the guess work as to where any fat gains may come from.

There is a commoly held perception that you MUSt take in 10grams of carbs per I.U. of insulin, some radicals say 5 grams… well, theyre both wrong.
I got curious about this when I discovered that my insulin dependant diabetic friend didnt even keep track of what she ate post injection. She would feel hypoglycemic after a shot and take a Glucose Tablet.
A glucose tablet is only 5 grams of glucose (carbs)! So I started to think, “Hmmm, mabye everyone is off point on this?”
After conducting a few experiments on myself, I found that you can go considerably lower in carbs than people previously believed.
Now it doesnt make sense to go low in carbs, because that defies the purpose of using the insulin in the first place, but it does free us from having to use so much that there might be some “spill over” in carbs that cant be utilized. So it really makes us able to have more freedom in carbs choices and amounts.
The “risk” in insulin use is not as risky as people believe. Any person with an ounce of sense can see the warning signs of a problem coming, and remedy the situation.

HOW DO I DO IT

If you look at the drug store, you can get these little pen cases that hold a loaded insulin syringe. They are great for our need, you load up the syringe, and put it in the case, and throw it in your bag/purse/whatever. After the workout, head to a bathroom stall and inject it under the skin! Pull up a little skin from the abdomen or upper thigh (anywhere will do, but these are easiest) and inject. Do not shoot into a muscle. This rushes the dose and makes it harder to predict when it will spike.
So now you have 15 minutes to get some carbs (actually you have longer, since the initial hit of the dose is mild and easy to cope with, the spike is a little more harsh, but still nothing unbearable. If you use the carbs, you probobly wont notice the initial dose OR the spike.)
(this is based on Humalog at 10 i.u.)
I use a powder with a 20% simple/80% complex ratio (actually its 17% mono, 5% di, 7% tri, 5%tetra, and 66% penta-saccharides). I use about 60grams of carbs to the 10 i.u. of insulin.
This gives me a nice solid stream of carbs to overcompensate my depleted muscles, but not so many that I risk fat accumulation from the excess.
Now you are good to go till around 1 hour after the initial injection. At this 1 hour mark, the majority of the dose hits your system. Now is the time to eat a good balanced (AND FAT FREE!) meal. The fat-free emphasis will be explained in the POTENTIAL PROBLEMS section. This balance meal of carbs and protien and little to know fat can be anything from a protien drink and a crab drink, to a low fat MRP, to some lean chicken and rice… your choice.
After this meal, you dont need to pay anymore consideration to the insulin, it will gradually decrease and will be out of your system at the 2 hour mark.
Till you get accustmed to the use of insulin, start low and slow. Start at 2 i.u. then 5 i.u. then 7 i.u. then 10 i.u. That way you get a better understanding of any hypoglycemia you may encounter. Ive went as high as 35 i.u., just to try it, but at a certain point a higher dosage doesnt yield any better results (except fat!)

Insulin is relativly safe. If you dont take in any carbs after using it, your body will give you PLENNTY of warning! Youll feel dizzy, tired, achey… hypoglycemic. What is happening is your body has no glycogen to use as fuel. Your muscles re depleted from working out, and often times youve tapped your liver for any remaining glycogen. The insulin does, searching for glycogen to use, takes the rest from your liver, and in the absence of carbs coming in to make more, it heads for the brain.
Your brain uses glucose as its primary fuel source (a little fat, too.) Thats why you get dizzy and light headed, the same with during a ketogenic diet… low glucose equals light headedness.
So if you forget about the carbs, youll get a warning from yuor body, and you can get your ass in gear and get some carbs in you.
If you get to the point where youre nauseated, just drink some sugary beverage and get some carbs in you quickly. Youre still a long long way from any major danger, but dont mess around.
“Fat Free” I said earlier about the 1 hour mark meal. During the 2 hours of the dosage duration, you should avoid fat like it is the plauge! Insulins partitioning properties are as effective at sending fat to the fat stores as it is carbs and protien to muscles!
So till the dose is clear of your system, NO FAT! (Thats another reason why I advocate the fastest acting insulin you can get.)

Well, I cant think of anything else off hand that needs to be said, but if I missed anything, just ask. I may have taken somethng for granted and figured everyone would know or assume on their own…