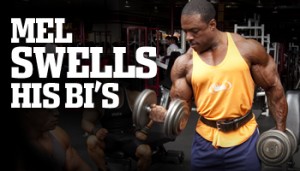 Despite being arguably bodybuilding’s greatest showman and, at his best, sporting one of the most dramatic rear double bi shots of all time, Melvin Anthony, Jr. is the stealth pro. He rarely grabs headlines but just as rarely finishes out of a money slot. In an 11-year career, he’s won only three of the 36 shows he’s entered, including this year’s inaugural Phoenix Pro, and yet in 21 of those contests he made the posedown, and that includes three consecutive Mr. Olympia’s (2006-08). In every battle, he’s come well-armed, so we got Mel’s thoughts on biceps training and a typical “good bi” routine.