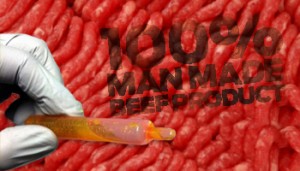 Cultivated “meat” used to be science fiction, but is now a reality

During the course of your day, you may go through enough animal protein to keep a small farm in business. Yet, regardless of the reason — be it ethics or concern about farming practices and the environment — some people wrestle with their daily slaughter. If you’re a bodybuilder who still wants to put on quality muscle but doesn’t want to participate in the killing of thousands of cows, chickens and fish in the process, there may be an alternative.

No, we’re not suggesting a vegetarian diet. We’re talking about cultivated meat, a technology that allows scientists to grow “meat” in a lab from stem and muscle cells without harming anything but a few petri dishes. It may sound like something out of a science fiction novel — but it could become science fact. Right now, no supermarket carries manmade meat, but that doesn’t mean it won’t be available in the future.

Still in its experimental stage, cultivated meat is created by taking cells from an animal, such as a pig, and proliferating them in a nutrient-rich medium. After the cells are multiplied, they are attached to a sponge-like scaffold and soaked with more nutrients. The muscle cells also may be mechanically stretched to increase their size and protein content. That may all sound highly technical — not to mention universally unappetizing — but the resulting product can then be harvested, seasoned, cooked, and consumed as a boneless processed meat, no different than hamburger.

In addition to potentially freeing the earth from the ills of modern farming, the benefits of this man-made meat appear to be lower fat content and the elimination of problems like bacterial contamination and mad cow disease. Such meat will probably be pricey at first and difficult to find in most grocery stores. But, in time, we all may be able to have our meat and keep a clear conscience, to boot. Check out new-harvest.org for more info.