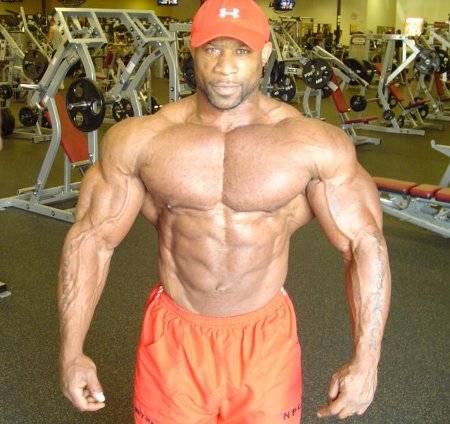 At this year’s Olympia gala, Marcus Haley won the FLEX Achievement Award for Male Comeback Athlete of the year. It was well-deserved. After making four pro posedowns during his first two years in the big league, a torn quadriceps kept him off stages in 2008 and threatened to derail his career. Returning to competition last year, the highest placing he could muster in four contests was a 9th. But the Comet soared in 2010, nabbing his highest pro placing yet, a second at the Orlando Show of Champions, followed by a respectable 13th amongst the world’s best at the Mr. Olympia. Haley, who turned 38 on October 5, shares his ideas on using dumbbells for arm training, and he dishes up a favorite triceps routine.

“I like free-weights for arms, and dumbbells give you the freest range of motion. I like to do both alternating dumbbell curls and hammer curls [with dumbbells] for biceps, and I also like dumbbell triceps kickbacks for triceps. All of these dumbbell exercises let me find the best groove for each arm and twist my wrists to get the best contractions.”