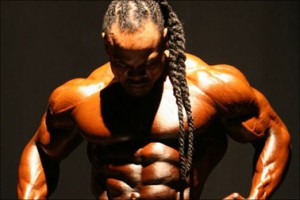 On top of having a sweet contract with supplement company MUSCLE MEDS, 35 year old Kai Greene has left Muscular Development magazine to sign an exclusive publishing deal with Weider Publications/AMI. This is going to REALLY piss off Steve Blechman (owner of MD) because Kai has been the post boy for that magazine for years now. With MD stealing Jay Cutler from Weider just a few weeks back, I guess this is just a little payback!

“I’m excited and I feel many steps closer to the goals that I dream about,” Greene said. “The first bodybuilding magazine I ever read was Muscle and Fitness, but FLEX wasn’t long to follow. To become a Weider athlete and be a part of the Weider organization is like watching a little boy’s dream come true … Myself and my team are very thankful and happy with all of the success we’ve been able to experience thus far … We’re not totally fulfilled yet, though. We still understand we have a lot of work to do and are happy to do that work. I’m thankful for the opportunity to do it in this fashion, as a Weider athlete.” Greene said.

Greene has had a tough life for most of his childhood and teen years and has had to overcome numerous obstacles on his way to becoming a champion bodybuilder. He’s now one of the top challengers for the Olympia title.

“What Kai Greene has had to overcome in his life on his quest to follow his dreams and become one of the top bodybuilders in the world is simply amazing,” FLEX Editor-in-Chief Allan Donnelly said. “His story is truly an inspiration to anyone who has faced adversity in their life. We are extremely happy and proud to be able to call him a member of the Weider/AMI family … Leading up to this year’s Olympia we knew we were going to have to make some tough decisions in order to shift our focus from the past and to the future,” Donnelly said. “We feel very positive about the athletes we currently have under contract, and know that they are going to be at the top of their game for years to come. Kai Greene is without a doubt at the forefront of that group, and we are excited to watch what he does next as he enters the prime of his career.”