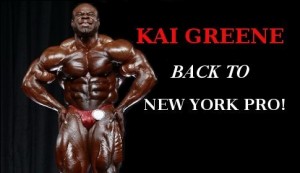 Two-time Arnold Classic Champion Kai Greene will return to the stage on May 28 at the 2011 IFBB New York Pro. Greene, who won the New York Pro in 2008, is coming off a disappointing 7th place finish at the 2010 Mr. Olympia. Greene decided to sit out this year’s Arnold Classic so he could regroup and get some much needed rest.

Now rested and healthy, Greene has a renewed vigor to become the best bodybuilder in the world. “I am looking forward to new beginnings,” Kai stated. “The New York Pro will be that and more!”

There is no better stage for him to start this new chapter of his career than at the NY Pro, held at the Tribecca Performing Arts Center. Greene first stood on that stage as an amatuer in 1997 and he turned pro there at the 2004 Team Universe; 2007 served as his launching pad to success in the pros, as his sixth-place finish in New York served notice that he would be one to watch. One month later he was, winning the first contest of his pro career in Colorado. If that wasn’t enough, Greene’s win at the 2008 NY Pro cemented his place as a top IFBB Pro League athlete.

NY Pro promoter Steve Weinberger is excited to have Greene in the contest: “It’s nice to have a local guy doing the show and it’s great for the NY fans.”

A dominating win in New York will again place Greene as a top contender for the Olympia title.

This show is gonna be even better than it already was. So we got Kai, Cedric, Jason Huh & many more that we’ll find out soon. See you there 🙂