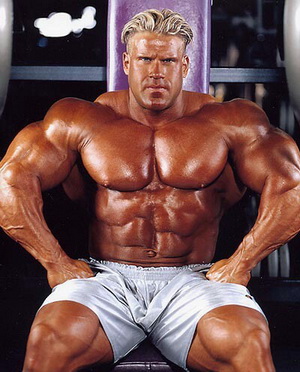 What is the most important piece of advice you can give to beginning bodybuilders just starting out?

The most important quality you need to cultivate is patience. Nobody makes progress as quickly as they would like to, not even the top pro’s. When you’re just getting started, you really need to forget all about going from a regular body to a great physique in 60 days, 90 days, or even a year. It takes time to build a good physique, and even more time to bring up any lagging bodyparts so that you’re complete and balanced. A lot of guys get discouraged if their back or their legs aren’t growing at the same rate, and they focus more on the areas that respond faster. That will lead to huge imbalances in the long term if you keep it up. At one point I had to recognize that my legs were overpowering my upper body, so I had to back off on them a little before the situation got any worse. I would also urge beginning bodybuilders to be very consistent with your diet and training routine. The growth process is slow, but it will be steady as long as you keep eating right and training hard, one day at a time. Finally, I would say to try and keep balance in your life and don’t make bodybuilding your whole world. There’s this idea that being totally obsessed and shutting out everything else in life will make you a better bodybuilder, but I think the opposite is true. Have friends and relationships, have other interests outside of the gym, and you’ll be a much more well adjusted person.

1) Do you have habits? that you do must do everyday? besides taking 5 showers a day and brushing your teeth 10 times a day? Such as having to check a website often, emails, watch videos etc.

2) Do you have any training rituals such as something you do pre-workout? or so like before you hit chest you warm up with some chest workouts with light weight on with a specific rep and set? before starting your routine.

I don’t know if you would call them habits, but there are certain things I tend to do every day. I spend a lot of time with dogs and take them for walks. But pretty much everything else I do is related either to my physique, which is my career, or my business. I spend a lot of time cooking and eating, taking care of mail orders, running errands to the bank and the post office, training, and getting various types of therapy done to aid my workouts and recovery. I really don’t watch a lot of TV. When I’m really busy, a month or two can go by where I don’t watch any. But I’m happy with my life and I do have fun. One thing Kerry and like to do is eat out two or three times a week. As for pre-workout rituals, I do have one that surprises a lot of people. I always take a shower not just after training, but before the workout too. I just like to feel fresh. Maybe it doesn’t make sense to some people because I’m going to sweat again anyway, but I feel better and more ready to train hard that way. I guess it’s because training is my job, and don’t most people like to go to work fresh and clean? I also have a couple things about what I wear to train. Unless it’s getting close to a contest, I wear only sleeveless shirts. And I don’t like wearing shorts too often anymore. Unless I’m training calves, usually I’m wearing sweatpants. And I stopped wearing a belt a while ago. As far as pre-workout supplements, I like to take a good nitric oxide product to maximize the pump. The one I use is NanoVapor from MuscleTech. Unless it’s pre-contest, I don’t use a fat-burner/stimulant. 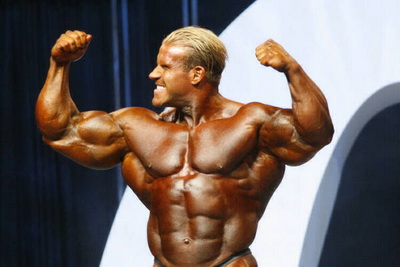 Wow, you have competed in over 30 shows!
1. How many more shows do you think your body can handle?
2. Who created the Olympia hairstyle- you, your wife or your barber?

I don’t think about it like that, in terms of my body can handle x amount more shows. I just focus on whatever show is next. Right now, that’s the 2010 Mr. Olympia. Actually, I break it down even more than that. I take one week of training at a time. I want to get through another great workout for each bodypart, because that’s really what it’s all about when you get down to it. Contest prep won’t start until June, when I am 12-14 weeks out from the Olympia. As for my hair, it’s funny how that was talked about almost as much as my physique at the last show. It’s not so surprising I guess, considering my hairstyle didn’t change much at all for over ten years. The credit for my new hairstyle goes to my assistant, Monique. She convinced me I needed a new look. People are still commenting on it. At the recent Arnold Classic, I can’t tell you how many people told me they liked it. I think it makes me look a little younger too. All in all, I’m very glad I switched it up.

Hey Jay, first of all congrats on Mr. O number 3! I only have two questions. What is your opinion about Chris Aceto? And If I’m having extreme cravings since the beginning of the diet, is it because there’s something wrong in my diet?

Chris has been a great friend of mine since I was a teenager, and he also taught me almost everything I know about nutrition. I had great success working with Chris for many years, and he has an impressive track record working with bodybuilders for the past twenty years. Cravings are perfectly normal once you eliminate certain foods you are used to eating once you start a diet. I have always found not only with myself but many other bodybuilders that once you start seeing the results of the diet and your definition begins to improve, the cravings become secondary. You actually start to associate the diet foods with more fat loss results, so you will think less and less about the foods that keep you from getting lean.

Jay, what weight did you drop down to after your layoff? I understand you took two months off from training after your last Olympia win. By the way, what did you weigh for that show?

I was 255 when I won the ’09 Mr. O, which was the lightest I had been since the 2001 show everyone always talks about. I was 273 when I won my first Arnold Classic in 2002, and I thought I was in pretty good condition there. To answer your question, I was 270 pounds at the end of that much-needed break, and I’m right at 5-9 on a good day. As I write this in the middle of March I’m sitting at 285. The thing with me is, I don’t worry about weight, and I don’t lie about it either. A lot of bodybuilders do, as if it matters. The sport is judged entirely on how you look, and the number on the scale is completely irrelevant. We are always asked what weight we plan to come into a given show at, and the correct answer would always be ‘whatever weight I look my absolute best at.’

Hey Jay, huge fan of yours. On a recent video I watched you said you trained abs for 45 minutes after every workout leading up to the ’09 Olympia. Do you use weighted ab stuff or just bodyweight? I am concerned about getting too thick through that area.

I use weight on most things, but it’s light. On one crunch machine I like, I only use 30 pounds, and I do rope crunches with a cable and just 70 pounds on the stack. For hanging leg raises, the weight of my legs alone is plenty. Contraction is really the key to training abs properly. When I do my morning cardio on the StepMill, I crunch down on my abs with every step. It’s sort of a twisting crunch when you do it that way. For the last Olympia, I hardly ever used a belt for the first time in many years. The belt would go on for heavy barbell rows or deadlifts, but I was squatting 500 pounds regularly without a belt. That will definitely work your entire core. For the last six weeks leading up to the show, I did work abs for 45 minutes after every bodypart. Going into that show, I knew that midsection development and detail was going to play a huge role, and it did. Earlier in my career, I did a lot of ab work because Chris Aceto was big on doing it consistently. Over the last four years I had gotten away from that because I thought it would thicken my waist. Eventually I figured that my waist would get smaller once I got into contest condition, but past a certain point it was what it was – it certainly wasn’t going to get any smaller because I stopped training abs. So I decided to play to my strength and have a lot of crazy detail in the abs and serratus. As long as I don’t use heavy resistance, there is no danger of my waist, or anyone’s waist, expanding.

Hey Jay congrats on joining team MD! i still have the old issues when you first signed with them. I must have got them when I was 8 or 10 years old! I met you at the North Carolina Mid Atlantic Classic in ’09. You took a solid 15-20 minutes out of your time just to talk to myself and my friend who I had been helping train for the show. He won the Junior Overall. I really appreciated that. You are a great Representative for this sport. I had a quick question. I was looking at your diet and I noticed that you were eating 275 grams of fats a day. I gotta say I know you’re a giant of a man and you’re going to eat much more than Joe bodybuilder when getting into shape, but my mind is blown. How are you able to consume that much fat in addition to all the carbs and still get totally shredded?

You also have to keep in mind that I train over two hours a day at a fairly fast pace, plus a do a lot of cardio. Hany had me eating less carbs than usual for my last Olympia diet, so the fats came up to maintain my overall calories. I have a pretty fast metabolism, and if I don’t take in enough calories I run the very real risk of flattening out close to the show. Keeping me big and full while dialing me in was not easy for Hany. But even though I was skeptical about lowering the carbs, I trusted him and it did what he said it would. My body responded better than i anticipated on higher fats. I stayed full, and I looked leaner and drier because I didn’t have as much water retention as I would have with higher carbs. So I really can’t give you a scientific explanation as to why the high fat totals worked well for me on that diet, but I do know that my overall size and activity levels were contributing factors. Someone else may not see similar results, which is why everybody needs to experiment and see what works best for them.