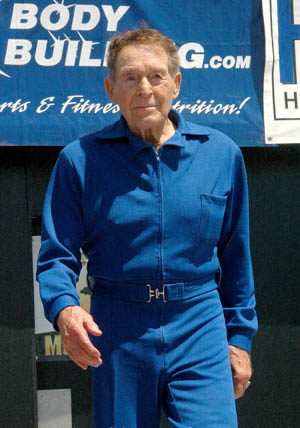 The cause was respiratory failure resulting from pneumonia, his family said.

And it was no wonder he lived so long, as LaLanne maintained the epitome of the clean life – as a child, he ate junkfood, but he always stated that he never ate unhealthy as an adult.

Before such endeavors were popular, LaLanne was into bodybuilding and weight lifting in the 1930s in addition to being a chiropractor. He was a pioneer in the fitness world, much like Joe Weider, with whom he was close. He had a television program, “The Jack LaLanne Show,” which was viewed by millions of people. LaLanne owned health spas and created cutting edge exercise equipment in his 20s and 30s, and his authority on heath and fitness endured even into his 90s, as evidenced by countless TV appearances and the popular “Jack LaLanne Power Juicer” that he sold on infomercials in recent years. To say Jack LaLanne had staying power is a massive understatement.

The older LaLanne got, the more active and ambitious – not to mention, creative – he seemed to become. At age 40, he swam the length of the Golden Gate Bridge underwater wearing 140 pounds of equipment (including air tanks) to set a world record; the next year, he swam handcuffed from Alcatraz to Fisherman’s Wharf in San Francisco; a year later, he did 1,033 push-ups in 23 minutes on a TV show to set another world record; at 60, he did the same Alcatraz-to-Wharf swim, only this time pulling a 1,000-pound boat; at 70, handcuffed and shackled again, he towed 70 boats, carrying a total of 70 people, a mile and a half through Long Beach Harbor.

In addition to his wife, Elaine, Mr. LaLanne is survived by their son, Jon, of Hawaii; his daughter, Yvonne LaLanne, of Walnut Creek, Calif., from his previous marriage, and a stepson, Dan Doyle, of Los Angeles, from Elaine LaLanne’s previous marriage.