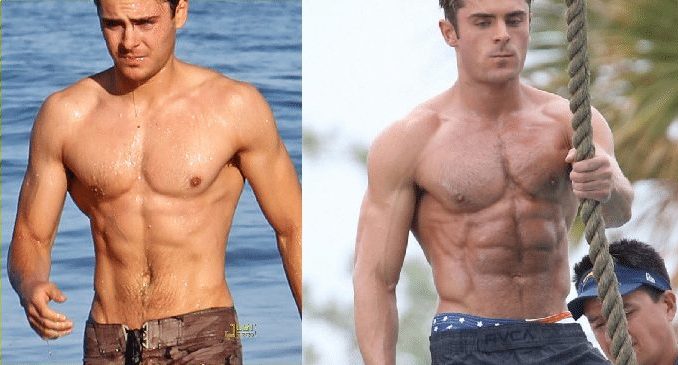 Lately, I have noticed there are a lot of speculation online whether is Zac Efron on steroids or not? It seems that there are more and more speculations going around especially in the last couple of months since the actor is getting the build up for the new film Baywatch so today, I am going to try doing my best to find out if he uses steroids or not, that’s based on some factors and evidence everyone can check by doing a research online.

It is obvious this speculation over is he taking steroids or not is because of his physique which seems to have a really good transformation lately as he went from having a good physique to being super ripped and as an evidence, take a look at the picture below: 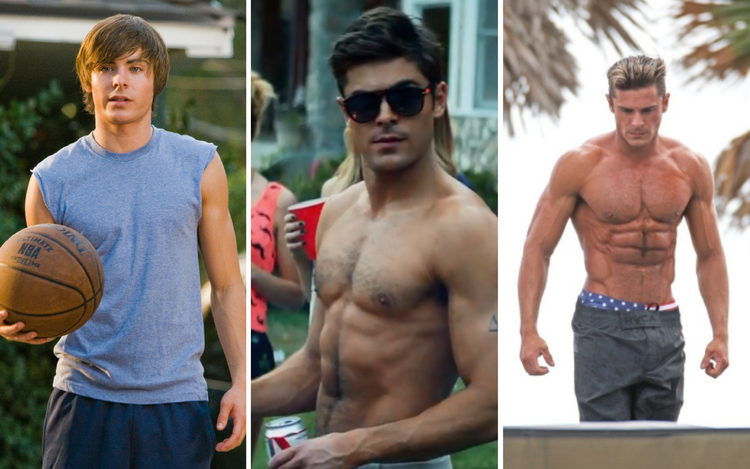 As much as we can see in the picture comparison, Zac Efron seem to have dropped down his body fat from around 9% to approximately 4% which is twice lower and as we all know, that’s extremely hard to achieve. That’s even harder to achieve when you’re looking to add some quality muscle mass in the time you lower the body fat percentage and it seems the actor achieved it. But we all know very well that this is very and very hard to do, requiring a lot of time and dedication to build muscle mass and burn a really good amount of fat in the same time. But we also know that this can be achieved much easier if you’re on steroids.

This is also easier to be achieved when you’re a newbie, however we all can notice that Zac Efron is not the person who’s the first time to the weights room, since he really bulk up a lot since his early days as an actor in high school. It does seem to be as if the research on Zac Efron online got a *boom* in the last year. That’s because there were very few people who cared or even knew about Zac and then, out of a sudden, like a *boom*, he got bulked up and there’s every second guy in the gym who is googling his work out and diet plans trying to copy them and achieve the same results.

Is Zac Efron Using Steroids or Not?

Before starting to rule out if he’s on steroids or not, I need to mention the fact that his physique looks can be achieved without using any steroids and that’s really important to mention.

I said that because Zac is indeed ripped really good but he is not having a ton of lean muscle mass which we all know to be impossible to achieve without steroids. That’s why, I do think that with some hard work, good dedication and with a really good dieting then the transformation we can notice Zac had, it is possible to be achieved without drugs. But then again, this requires a lot of time, dedication, dieting and hard work. Nonetheless, it seems that Zac didn’t required it all, at least, he didn’t required years, but only some months. This proves he’s been and maybe still is on Steroids. How do we know Zac only required months? He shared this information with us all on his Twitter account.

As much as we can see, Zac Efron only needed some *months* in order to achieve such a transformation but people who try to stay natural and try to achieve such results they know that it doesn’t happen like this in a matter of a few months only by natural ways.

Yes, there are some rare cases when this may happen even being natural, but I doubt this is the case for Zac and here’s why: the dude seem to be a naturally small, skinny ectomorph frame and that’s not typical for such a guy to achieve such results naturally. But there are other factors we should take in consideration as well. 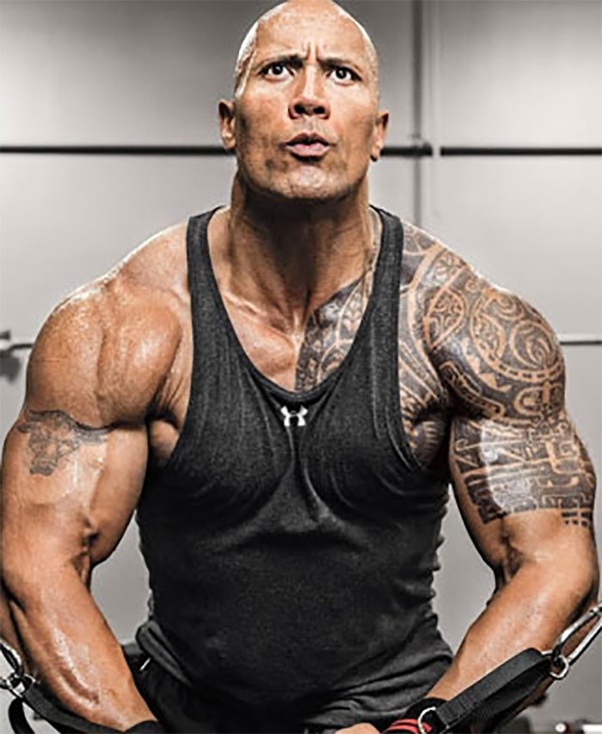 It has been said that Zac was trained by Dwayne *The Rock* Johnson and I think this says something. While, of course, that’s not a real prove, I still think that’s quite possible. What I’m trying to say is that we all know that The Rock is using steroids and while he was personally training Zac for the movie, there are quite good chances that Zac started using steroids himself.

Then again, obviously that’s not a real evidence that Zac’s on steroids, nonetheless, I think that this fact greatly increases the chances of him being on steroids. There are other reasons as well.

Face changes – testosterone jaw and others

For those who don’t know, people who are using steroids are going to get their faces a more blocky/ winder look. This is another sign which allows us determine if a person is on steroids or not. Do a research on steroids to find it out. So, being on steroids your chin is going to be more broad and your jaw is also going to get much bigger and much defined.

While we do know that this happens with every men as they age, steroids greatly speed it up. In other words, steroids are making your face looking more manly and *brutal*.

You could simply check through some photos of Zac and see the comparison. His face became much more blocky looking. and he didn’t required years for this.

As I earlier said, being on steroids your face is going through a lot of changes and except for blocky looking and manly jaw, your face is also *aging* faster as well. And if you pay attention to how Zac’s face has changed in 2 years from Bad Neighbors in 2014 to the movie Baywatch in 2016 you can see he aged quite a lot, not typical for 2 years.

You don’t have to be a good researcher to find out that steroids have been linked with causing premature ageing. This means that there are several theories which suggest that there are several steroids which can reduce the production of collagen. But without enough collagen production it means that your skin is going to become less elastic, thinner and it is going to be more likely to wrinkle. 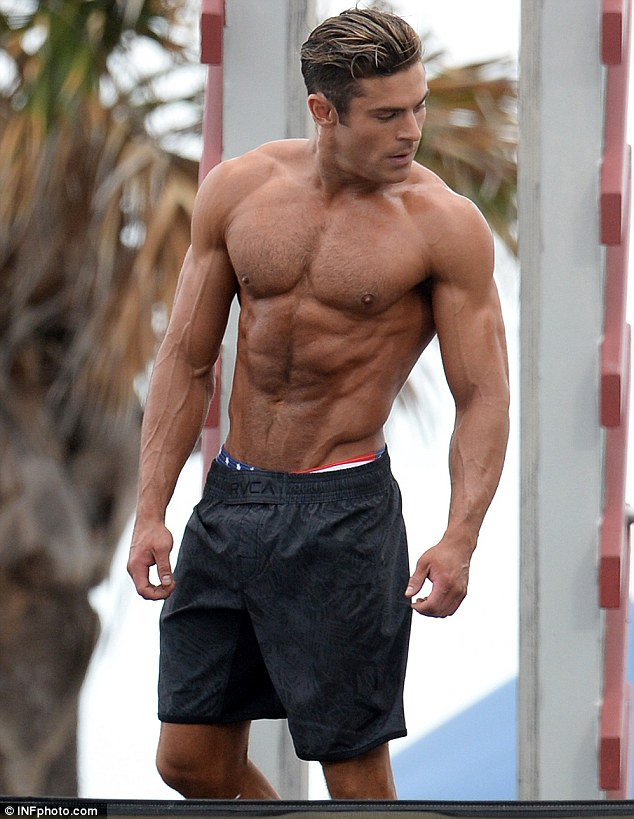 Just pay attention to the way he looks in the photo. He definitely doesn’t look his age, in fact, he looks as if he’s 40 years old or so. Another factor we can notice here is the fact that he got a skin thinning effect as well which is another sign of using steroids. This skin thinning effect is increasing the person’s vascularity and as a result – there is less skin that is covering your veins. Pay attention to how many veins and how pronounced they are on Zac’s body during his Baywatch movie. Since the veins are so much closer to the surface of Zac’s skin as they can be seen so good, it is another sign of steroids intake.

This is exactly what can explain the reason why the steroids users are so much more vascular compared to the natural lifters. That’s all the result of using steroids – the blood cell production increase all along with the reasons I earlier mentioned. So, in the Baywatch movie, Zac does look very vascular with the bulging veins that are flowing through his entire arm.

Zac has got a much deeper voice

Except for the fact that Zac Efron got big changes on his aging face and big body transformation, Zac has also got a deeper voice. Everyone can simply check it using YouTube interviews. Just check Zac’s interviews for the Bad Neighbors movie in 2014 and check his interview for Baywatch in 2016.

Listen carefully to his voice and you can hear that his voice is considerably deeper. Of course, as we age, our voice (especially men’s) are getting deeper. But unless you’re having some health issues or using steroids, you can’t have such a big voice change in only 2 years. The deeper voice is a symptom of higher testosterone level and using steroids has as a result the higher testosterone.

We have always known Zac Efron as an actor that has baby smooth skin with nearly no hairs follicles at all, nearly nothing on pubic hair, facial hair, chest or even on his legs. However, we can notice in the Baywatch movie that Zac has got a lot of hair on his chest and there was so much hair that even such actors as Wolverine would have been proud of! 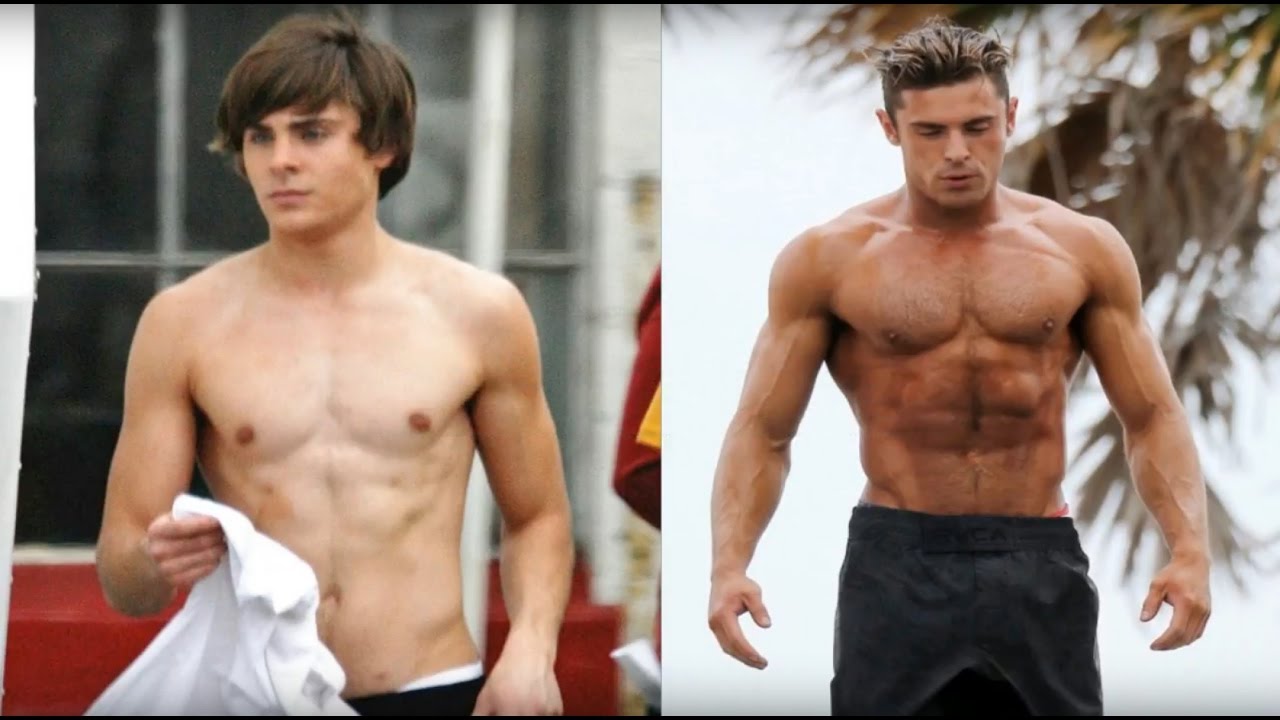 We can notice that this is such a hair growth where your testosterone levels are extremely high so by shaving it would give no result as the hair would have been grown up by the next morning again. With such a hair growth in such a short period of time, I can say it is a sign of steroids use.

In all the pictures that I have posted above there’s another thing you should pay attention to – Zac Efron’s hair. We can easily notice that his hair is looking much thinner and much more receded towards the sides.

Usually, such a difference is happening because of an increase in the hormone named DHT – Dihydrotestosterone. DHT it is the greatest and most important hormone for building muscle mass which is around 5 to 10 time MORE anabolic than testosterone!

While that’s amazing as you build muscle mass by having the increase of DHT , there are, obviously, side effects as well. For example, this hormone is killing the hair follicles and therefore you are getting hair loss effect. This is giving you an effect of a really sore scalp, unluckily.

So, by having an increase of the DHT and the soreness that you’re feeling when you get it – that’s the effect of the inflammation from those damaged hair follicles. There are some products such as Rogaine and Propecia that are able to help with this effect, but there are huge problems. These items are having DHT blocking properties and those dudes who decide to use these products for not getting the receding hair effect get the lower DHT levels in their bloodstream. What’s the result of doing it? obviously – those guys are having big issues with building muscle mass since the greatest androgenic hormone allowing building muscle mass is being stopped.

So, what’s the conclusion?

Assumingly, what steroids were taken?

To my opinion – Winstrol. Of course, I can’t be sure, but I think it is Winstrol because Zac did not gained a huge amount of size but yet, he seemed to have got much more shredded and it is extremely dry. Winstrol’s properties sound the closest to what Zac Efron obtained. That’s because the Winstrol’s main benefits include: it is burning fat, it is shedding water and it is building mass but only in small amounts.

As much as we can see, Zac Efron has experienced all of the 3 benefits Winstrol is offering, and that’s especially the diuretic effect since the actor is extremely dry. In addition to that, other factors made me think he’s using Winstrol – it is a DHT derived steroid – hence it is giving the explanation of the Zac’s steroid jaw, aged face and thinner hair.

Thanks to the following sources for helping me in of making this article: