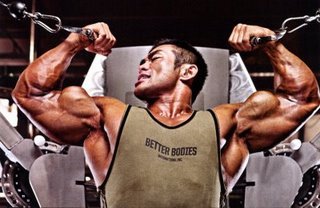 When talking body fat levels ‘Metabolism’ is one of those words that gets thrown around a lot. If someone’s in better shape it could be said that person has a higher metabolism.

But hang on, that person might exercise a bit harder than most and may have healthier eating habits, so is their buff body really due to gifted genetics? Or is it more about lifestyle? And what the heck is metabolism anyway?

Metabolism is the rate your body uses calories. These calories are used for all processes required to keep you alive, including the beating of your heart, digestion of your food, and repair of your muscles.

There’s 2 areas you need to tackle – diet and exercise.

By eating foods at specific times, and by exercising in certain ways you can make significant improvements to your metabolism. Sure, some people do naturally have faster metabolisms than others but we ALL have the ability to improve on what we have.

Your body size also plays a part in the speed of your metabolism. But not how you might think. The heavier you are the more calories your body needs to function, so the higher the metabolism. If you consider yourself ‘chunky’ due to having a slow metabolism forget that excuse once and for all.

Although, in the case of a smaller person holding more kg’s of muscle compared to another, the muscular individual will have a faster metabolism. That’s because muscle tissue is more ‘metabolically active’ than fat. The body needs more calories to fuel muscle than body fat. Every gram of muscle you hold contributes to the amount of fat you can burn. That’s a good reason to protect lean muscle – muscle volume contributes to the speed of your metabolism in a big way.

Ignore this following fact at your peril – inactive adults will gradually lose muscle tissue, and sometimes much faster than you think. After taking 2 weeks off training over Christmas I’ve discovered this for myself! If you don’t exercise your body will lose it’s ability to fend off flab as fat fighting muscle erodes
away.

To insure your current ability to burn fat you need to perform some resistance exercise at least a couple of times per week. For greater fat dissolving ability, concentrating on adding more muscle is the answer. For that you will need to do 3 to 5 resistance workouts each week.

Physical activity will also have a stimulating effect on the metabolism. The more intense the exercise the greater the effect. Interval training and resistance exercise are the best choices. Each places such large demands on the body that the metabolism can remain elevated, melting fat for hours after training has finished. If you include both then all the better!

Another way to increase your metabolism is through focusing on what you eat – by using the TEF principle – or the Thermic Effect of Food. Certain foods cause the body to burn more calories to digest them than others. Protein digestion requires the largest energy expenditure, while dietary fat is the most
easily digested so has little thermic effect. Carbohydrates are somewhere in the middle.

Because protein naturally turns up the heat on calorie burning always include plenty at every food stop. Good sources are Lean Meat, Lite Cottage Cheese, Eggs, and Whey Protein Powder. By following a diet with an emphasis on protein at each meal you’ll soon have a metabolism running at a faster rate. Plus have the best chance of ridding body fat or keeping it at bay.

Other food ingredients can also help kick your metabolism into high gear. Studies from Japan have shown that eating spicey cayenne may boost metabolism by up to 30%. In Switzerland another investigation showed men who took a Green Tea Supplement 3 x per day burned more calories each day compared to those who took a caffeine pill or placebo.

And remember never skip breakfast, this meal starts your metabolism racing for the day. Now get to it and burn off some body fat!