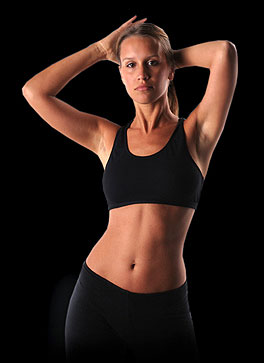 An easily made mistake when dieting is thinking that all weight lost is fat. In truth diets usually cause a loss in fat, water AND muscle. After dieting and back onto normal eating some people are mystified as to why they pack on flab fast.

Why does this happen? Calories are burned by muscle. When you lose muscle your calorie needs become reduced. Metabolism is slowed. This means the amount of calories you used to have to eat to keep weight constant is now less. If you eat above this new, lower calorie threshold you gain fat.

Here’s an example of what I’m talking about:

Jim crash diets for a month and drops 8.5kg. He’s stoked. Of this weight loss 5kg is fat, 2.5kg is muscle, and 1kg is water. When at rest every kg of your muscle burns around 100 calories per day (it burns even more when you exercise). Because Jim lost 2.5kg of muscle his metabolism has dropped and his calorie requirements are now 250 calories less per day than when he started. He used to eat 2800 calories per day, now anything over 2550 calories per day will cause him to gain fat.

Happy with being 8.5kg’s lighter and ignoring the muscle loss Jim goes back to eating the amount he used to before his diet. With his slower metabolism and eating 250 calories per day more than he needs means he’ll gain fat at the rate of 1kg per month. Checking in with Jim 12 months later he’s gained a whopping 12kg of fat!

Jim would have been better off not dieting at all. Feeling desperate he decides the best option is to hit the diet again. Using the same old approach he experiences similar muscle loss and ends up damaging his metabolism even more. He’s lowered his calorie threshold by a further 250 calories. Now that’s plunged to 2300 calories per day – a huge 500 calories under where he was before the first diet.

Imagine the scenario after another 3 or 4 more of these crash diets? This cumulative metabolism erosion is how dieting can make you fatter.

Diet companies are cashing in, and banking on repeat business. They know that their low calorie systems will make you fatter so you’ll be back to sign up next year. All you’ll likely remember are the Kg’s lost on their plan to begin with not that the diet caused you to gain more fat over the months since.

So what’s the alternative? To lose weight and keep it off you need to protect your metabolism not destroy it.

95% of people who diet gain all the weight back and usually more. Don’t let it happen to you. Stick to the following and you will be on the right track:

– Include a protein portion with every meal