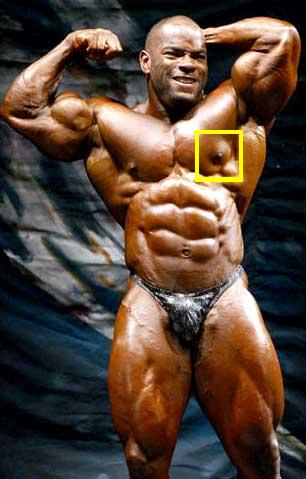 Gynecomastia is a benign enlargement of the male breast resulting from a proliferation of the glandular component of the breast. Gynecomastia results from an altered estrogen-androgen balance, in favor of estrogen, or increased breast sensitivity to a normal circulating estrogen level.

Testosterone, is synthesized in males mainly by the Leydig cells of the testes (95%) and, to a much lesser extent, by zona reticularis cells of the adrenal cortex (5%). Two thirds of the circulating testosterone is bound to sex hormone–binding globulin. Testosterone is converted to dihydrotestosterone (DHT) in the target tissues. DHT is often considered the active form of testosterone. Testosterone is under the feedback regulation of luteinizing hormone (LH) secreted by the pituitary gland.

Estrogen production in males is mainly from the peripheral conversion of androgens (ie, testosterone, androstenedione) through the action of the enzyme aromatase, mainly in muscle, skin, and adipose tissue.

Various drugs are implicated in gynecomastia:

– Drugs that enhance estrogen synthesis such as gonadotropins, clomiphene, phenytoin, and exogenous testosterone.