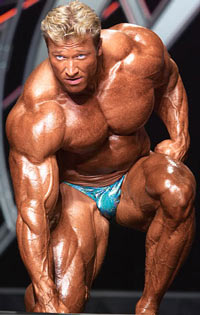 There is a former bodybuilder residing in California who walked away from the sport to take up acting. He has a very unique sounding accent and has always been a huge fan favorite. After years of retirement, he has decided to once again don the posing trunks and grace the stage.

No, we’re not talking about Arnold Schwarzenegger but he was one of Gunter Schlierkamp’s inspirations.

“The German Giant” may be 40 years of age and six years removed from his last contest, but do not sell him short. “I feel like I’m 30,” the 6?1? Schlierkamp said on a recent episode of MD Radio. “I was down to 260 and I’ve already put back on about 25 pounds and things are starting to look pretty good.”

During his competing days, Schlierkamp had an offseason weight of 300 and took the stage in the 280 range. He had to drop some of that in order to get the acting roles he was seeking but stayed in excellent condition throughout his hiatus. Once he made the decision to compete again, it was as psychological as it was physical.

“If I didn’t think that I could come back and look as good as I was or even better, then I wouldn’t even think about it.”

Just when Schlierkamp makes his appearance remains to be seen. He is hoping to get back by the end of this year but also is hoping for an invite to the 2011 Arnold Classic, a show that he has competed in on four prior occasions. Perhaps the best year of his career came in 2002, when Schlierkamp finished fifth at the Mr. Olympia in a show won by Ronnie Coleman. Three weeks later, Schlierkamp beat ‘The King’ to win the GNC Show of Strength.

A year later, he once again placed fifth at the O. In 2004 he fell back one spot but in ‘05 he came in looking extremely sharp. Many people had him in the top three if not winning the Sandow, but he ended up in fourth. In an October 2008 appearance on MuscleSport Radio, Schlierkamp expressed great disappointment in his placing and even more so after placing 10th at the 2006 Olympia.

That is when he decided to step away from bodybuilding and establish himself in Hollywood. He appeared in a number of television commercials and a few films, most notably “Beerfest” (2006). Even though he is going to compete again, Schlierkamp does not feel as if his acting career is over by any means. In fact, he just hired a new agent.

“I hope that I can create a look that people finally like,” he told host Shawn Ray. “Maybe some movies need a big guy again.” That answer may come in time, but bodybuilding is certainly getting a big guy again.

When Schwarzenegger made his comeback in 1980, he reclaimed his Olympia title. Anything close to that with Schlierkamp is something that would make a great movie.