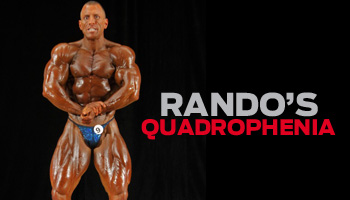 Massachusetts native Greg Rando entered his first bodybuilding competition way back in 1992 and nabbed pro status by winning the overall at the 2001 Team Universe. He’s entered eight pro shows over the past six years, and the best was his last: seventh at the 2009 Pittsburgh Pro 202, where he also won the best poser award. What’s most amazing about Rando’s many bodybuilding accomplishments is the fact that he has been blind since his teenage years, a so-called “disability” which has never held him back. Today, he is not just a successful bodybuilder but also a successful bodybuilding trainer. Rando’s wheels are among the best in the 202 class, so we got this inspiring athlete’s quad-training tips and quad routine.

* “I train quads once per week on a separate day from hamstrings to give most my full focus.”

* “Doing leg presses one leg at a time lets me really focus on each leg individually.”