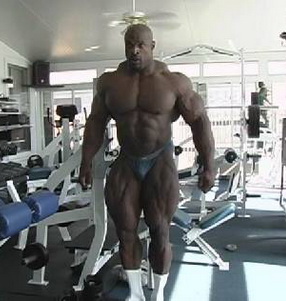 Bodybuilders are getting bigger than ever. Jon Hotten on the freakish world of rippling abs and exploding quads

There’s an undeniable thrill in standing next to the biggest man in the world. Of the six billion bodies on the planet, the vastest, the baddest, the most extreme, is just inches away, oiled and clad in sparkly posing trunks.

Ronnie Coleman, 41 years old, the reigning and seven-time Mr Olympia, comes from Texas and he’s as huge as the state, with comic-book arms, a superhero’s chest, widescreen thighs. When he fires up his six pack, the cuts in his abs are so deep you could slide a pound coin into one and never see it again.

The bare facts are impressive enough. In contest shape, he weighs 295lb (21st) with four-per-cent body fat (David Beckham has about 10 per cent). His upper arms have a circumference of 25 inches, one thigh is three feet around, several inches greater than his waist. His muscle dwarfs the bits of his body that refuse to grow. His head, his hands and his feet look like they belong to someone else, someone smaller.

Yet there is something extra about Ronnie Coleman, something larger that glows from him. You have to see him to believe it, but it’s there, a powerful inward gravity that comes from 27 years of heavy training and an almost unique genetic susceptibility to growth and gain. His favourite saying, as he’s about to lift some absurd weight – to leg press 2,200lb for example – is, “ain’t nothin’ but a peanut…”. But Coleman is a man of few words. It’s his galactic physique that does most of the talking, and it has plenty to say.

Researching a book on bodybuilding, I first saw him step on to the stage at the Mandalay Bay Hotel in Las Vegas for the 2003 Mr Olympia contest, a show at which he essentially redefined the parameters of the human body. I laughed, and I wasn’t the only one. It seemed to be the only appropriate reaction. That night, Ronnie Coleman was simply unbelievable. He was in a condition that perhaps no other human had ever been in.

People unused to the heightened freakiness of pro bodybuilding – and that’s most of the world – may think him quite mad. But it’s hard to gaze at his rolling acres of muscle and not feel some small awe that we are all of the same species; that we are concocted of the same basic loop of DNA. Because with Ronnie Coleman and the rest of us, the similarity ends there…

There are some other big boys knocking around, too. Jay Cutler, a beaming blond behemoth from Las Vegas via Massachusetts, is Ronnie’s closest challenger; there’s Markus Ruhl, a German with shoulders like the back legs of a racehorse, and Gunter Schlierkamp, another German, with enough meat on his bones to make him the first man to step on a contest stage at over 300lb. There are Brits, too: from Birmingham comes Ernie Taylor, perhaps the only 18-stone man in the world to boast a 29-inch waist.

Bodybuilding is magnificent act of folly – it’s also tremendous fun to watch. The contests themselves are barely sporting. All of the actual sport takes place before the show. The contest merely displays the results of its pursuit – to music. If your body is suitable to build, you must live by the real rules of muscle, which are utterly uncompromising. Heavy training, in surprisingly short bursts, builds the body, but food is the great engine of growth. Six to 10 meals per day, seven- to eight-thousand calories are the norm.

It’s a cranked-up Atkins diet of almost pure fatless protein – they eat turkey, chicken, tuna and anything that tastes like cardboard, and they supplement it with power-shakes that contain the several chickens’ worth of calories that they don’t have the time or inclination to consume conventionally.

To watch a pro bodybuilder eat is instructive. They chew only enough to get it down, like men feeding coal into a boiler, for food has no role other than fuel. There is no pleasure attached, instead it becomes something else to endure.

The other requirement is – and it’s pointless to pretend otherwise – the willingness to use steroids, growth hormone and diuretics as scientifically as possible to produce the “ripped” contest body. The damage done can be incremental, progressive, unpredictable.

Andreas Munzer died in 1996 12 days after finishing sixth in the Arnold Classic, the Terminator’s own tournament. His liver had melted and his heart had failed. Three years earlier at the same tournament, Mike Matarazzo collapsed. Mohamed Benaziza perished in 1992, suffering a heart attack on the European tour. Paul Dillett “froze” on stage at the Arnold in 1994, too dehydrated to move. Steve Michalik narrowly survived cysts in his liver the size of golf balls.

The rewards of the sport, the big prize cheques and the contracts with magazine companies and supplement makers, come to only the very few at the top. Most of the hundred or so professionals outside of the top 10 get by however they can. The American market, which hosts the two biggest shows – Mr Olympia, the greatest title, and the Arnold Classic – is by far the largest.

Those contests offer winner’s cheques of around $100,000 and draw crowds of thousands. In Europe, where there’s an annual tour of the UK, Holland and Russia, the top prizes are $30,000 and the crowds down in the hundreds. It is a small exchange for getting so big, for living a life so close to disaster.

In the past three decades bodybuilding has gone through a super-evolution. Minutes after the Mr Olympia show of 2003, Arnold Schwarzenegger stood with Wayne DeMilia, who was the head judge of the show, and who had been Schwarzenegger’s friend in the days when Arnold took seven Mr Olympia titles of his own. Nearby was Ronnie Coleman, still in his posing trunks and a pair of flip-flops, holding his winner’s cheque for $110,000.

“I could see Arnold looking at him and working it out,” Wayne DeMilia said. “I said, ‘Hey Arnold, look at that. Ronnie’s five ten. He’s 290lb or thereabouts. You were what, six one and about 240 when you won in ’75? He’s three inches shorter and 50 pounds heavier and more ripped in just under 30 years.’ Arnold was just shaking his head.”

Therein is the great conundrum of a sport whose most famous competitor remains best known for other things. It has kept its head above water by virtue of its extremity, and yet that very extremity prevents it from being anything other than a sideshow. The men who pursue it almost relish the fact. The contests bring their own drama, in which years worth of hardship can be discounted in a few minutes by judges who like one guy’s muscles better than the other.

I spent two years following the big men about, and ended up as a big fan. I have no doubt I was looking at a strange kind of glory.