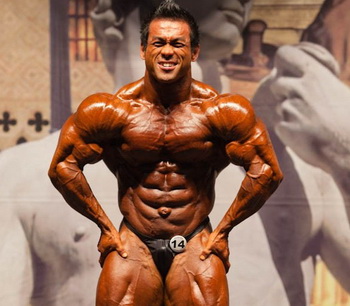 Perhaps this may be a valuable lesson learned by Hidetada Yamagishi. The six-year pro’s career has definitely been on an upswing but has been derailed with an untimely leg injury. While preparing for the Pro Bodybuilding Weekly Tampa Pro, he was doing seated bicep curls and felt a “tear” type of feeling in quadracep while finishing off a set. This appears to be related to the upper quad strain that he suffered after the New York Pro in May.

Yamagishi is scheduled to undergo an MRI exam on Monday to ascertain the extent of the injury. As it is, he had to pull out of two shows because of it, in Tampa and Connecticut. He is said to also look to take this time off with getting hernia surgery that he was putting off until the offseason.

Considering that the Olympia is coming up in September, that would mean that Yamagishi is done for the year. A big blow, for sure, but not one that he cannot recover from. He has many good years left on the big stage and this may turn out to be the best thing that happened to Yamagishi. His body needs the rest and he can use the time off for that and to put on some size.

Hurting your quad while doing a seated upper body movement is a message that your body is telling you to slow down. Yamagishi has already competed in four shows this year and planned on doing seven. That is too much for anyone, especially a bodybuilder with a smaller frame like his. In 2009, Yamagishi competed five times.