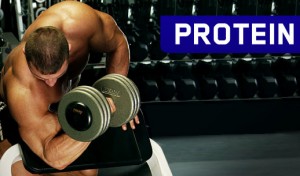 Here are a few fail-safe perks of protein to prove once and for all that there’s more to this provocative subject than you’ll get from the chicken heads clucking in the gym. Let’s set aside the fat and focus on the sizzle of the great protein debate.

1 LEAN BEEF AND WHEY GET YOU RIPPED

Leaning out dictates that you limit daily fat intake to 10% or less of total daily calories, increase aerobic activity and go the low-carb route. As carbs are decreased, the calories lost must be replaced with calories from protein. Whey is the ideal choice to fill that void, as it is dense in branched-chain amino acids (BCAAs) and readily used as fuel when the body is in low-carb mode. Lean beef, another viable protein option during dieting, is packed with alanine, a vital amino acid that, when converted into glucose, can be used as an energy source. In this way, the protein-based calories targeted for muscle building are not instead burned as fuel when carbs are low.

2 MIX PROTEIN AND CARBS AFTER TRAINING

The name of the game is “spiking” insulin, the anabolic hormone that increases glycogen formation and protein synthesis. A great way to spike is to add a protein powder drink to your posttraining meal. For ideal mass building in the metabolic golden hour after training, consume your carbs and protein in a 3:1 ratio. If you take in 30 g of protein, for instance, also consume 90 g of carbs in the same meal.

This is one of those deals where less turns out to be more. Let’s say you’re rolling right along in your normal pattern of eating protein to build muscle. Then, once every six days you decrease protein to .5 to .7 g per pound of bodyweight while increasing carbs accordingly (a 200-pound bodybuilder, for instance, would take in an additional 60-100 g of carbs to make up for what he is losing in protein on that day of protein reduction). This sudden drop in protein sets off an internal alarm that shifts the body into a protein-preserving mode to guard against deficit. Once you return to your standard protein intake, you’re more likely to add more muscle mass because the body continues to produce the enzymes and hormones triggered by the one-day protein drop.

Besides all the obvious muscle-building advantages, complete sources of protein contain BCAAs that are anticatabolic for bodybuilders on low-carb diets. These handy aminos can be burned as fuel by muscles when carbs are low, while other aminos found in protein (alanine, glutamine, glycine, threonine, serine, methionine, tyrosine and lysine) can be converted through the liver into glucose to prevent muscle loss.