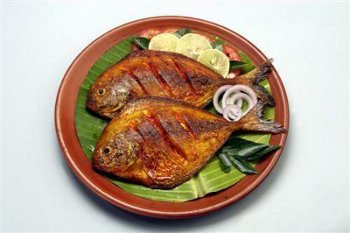 Fish is a staple of every bodybuilder’s diet. Even before we knew that certain fats were actually good for us, most types of fish made a great source of lean protein for the serious weight trainer. On today’s bodybuilding menu, fattier fish like tuna and trout also make the list, thanks to their essential omega-3 fatty acids that not only offer health benefits, but also can actually enhance muscle growth and fat loss. Low-fat fish, such as cod, halibut, sole, light tuna and tilapia still makes a great meal for bodybuilders.

So, if FLEX is telling you that tilapia is a good low-fat fish to eat, you may be wondering why the mainstream media has been telling you to avoid tilapia like the plague. That’s a great question, and of course, we have a great answer. It’s just another case of scientists failing to use common sense. The researchers who claimed that tilapia was unhealthier for you than bacon or a greasy burger were from Wake Forest University (Winston-Salem, North Carolina). Why did they make this claim? It’s because, according to a study they published in a 2008 issue of the Journal of the American Dietetic Association, tilapia has an unsavory ratio of omega-6 fatty acids to omega-3 fatty acids.

They were correct in the finding that tilapia has a ratio of omega-6 to omega-3 of between 2:1 and 3:1. A healthy diet should contain a ratio of 1:1 or less. But note that the key word here is diet. That does not signify that every single food you eat in your diet has to have this ratio. It just means that at the end of the day, your total intake ration for omega-6 and omega-3 fatty acids should hit about 1:1 or less; that is, you should eat an equal amount of omega-3 and omega-6, or less omega-6 than omega-3. You need a certain amount of both in your diet.

What the researchers neglected to mention is that tilapia is a low-fat fish. So, despite its ratio of omega-6 to omega-3, it contains very little of both. The U.S. Department of Agriculture lists tilapia as having just 2 grams of fat per 3.5 ounces (the amount of fish used in their study). The Wake Forest researchers reported that tilapia has only about 300 milligrams of omega-3 fatty acids per 3.5 ounces; so, at a ratio of 2:1 to 3:1, it has only about 600-900 mg of omega-6 fatty acids. If you had a typical 7-ounce piece of tilapia, you’d still only be getting about 1,200-1,800 mg of omega-6 fatty acids. That’s not enough to be considered unhealthy. What’s more, if you supplement with omega-3 fatty acids, as every serious bodybuilder should, a dose of only about 1-2 g of omega-3 fatty acids would have you more than covered to keep your ratio in the 1:1 range.

So, enjoy your tilapia, and keep in mind that there’s often more to “expert” opinion than meets the eye.