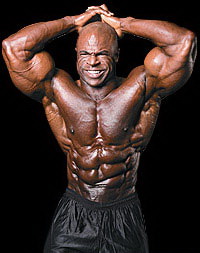 Tall bodybuilders aren’t noted for their slim waistlines and deep abs. That’s suppose to be a “little guy” thing, right? Ed Nunn says, “Hell no!” The 6’1″ Nunn completed a super sweep in 2008, winning the super-heavy class at both the NPC USA’s and Nationals and taking the overall at the latter. And he did so largely on the strength of his middle. Nunn, who placed fifth in last year’s Sacramento Pro, has one of the best waists in bodybuilding. Get ready to get an education from Ed on how to etch in prize-winning abs.

NOTE: This is a typical routine, but Nunn chooses three ab exercises per workout, and often does crunches or seated knee raises.