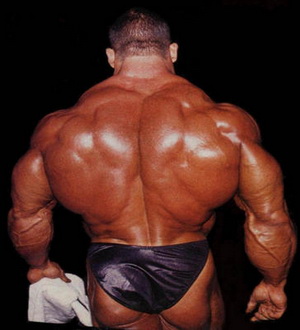 “No, they’re not packed with protein, but veggies are a still a bodybuilder’s best friend.”

To maximize mass gains the basic rule of thumb is to take in protein throughout the day at two-hour intervals, and that time-released plan includes the preworkout meal. I generally train in the late morning, and I have a meal replacement powder — high in protein, amino acids and minerals with only a small amount of carbs — about 90 minutes prior to my session. If you plan to eat two hours before training, it’s fine to opt for a balanced meal of chicken breasts (protein), rice or potatoes (starchy carbs) and green vegetables (complex carbs).

Immediately after training, I slam down a simple-carb drink to raise insulin levels, force the carbs and amino acids back into the muscle and to restore glycogen levels. This recovery-drink supplement should be 75% simple sugars and 25% quick-to-digest proteins, an ideal postworkout carb-to-protein ratio to spur recovery.

Some bodybuilders equate sugar with energy and therefore jump to the conclusion that it’s best to load carbs prior to a workout as a kickstarter. That’s exactly the wrong thing to do, because your blood sugar levels will actually drop during the training session, and you’ll fatigue more quickly and lose endurance. To maximize energy and recovery, like I say, I schedule a carb drink immediately after the workout is over. One hour later, I eat another balanced meal of protein (beef, chicken or fish) and complex carbs (potatoes or rice and a fibrous green vegetable). Lack of careful planning is the main impediment to making progress. Only so many nutrients can be absorbed in one meal, and that’s why the goal is to eat six or seven small meals to supply your body with its essential muscle-building elements.

My diethas evolved and improved since I retired from competitive bodybuilding. I’ve done considerable research on how to integrate a blend of fast-and-slow-acting proteins into my meal plan to trigger growth. The following chart details my typical day of meals — designed to maximize protein intake and trigger gains in lean body mass— while I’m at home in Birmingham, England. 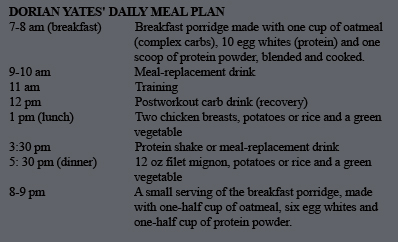 That’s my nutritional rota, and it keeps the metabolism ticking along quite nicely. The biggest mistake most bodybuilders make is skipping meals and then foolishly trying to overcompensate by bingeing and overeating later in the day.

Plan ahead. Allow your body adequate postworkout carbs for recovery. Don’t go too low on carbs or your body will be forced to recruit protein for energy during workouts. Pack in enough protein to ensure steady gains and to feel healthier and stronger at the office and in the gym.