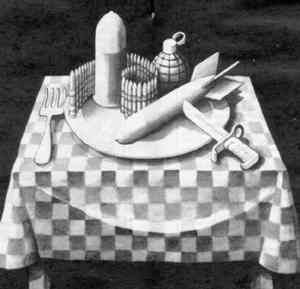 1 Don’t Cut Calories Too Much
Eating fewer calories than you need each day creates an energy deficit causing fat loss. However, severe cuts can lead to a slowing of the metabolic rate, ultimately making it difficult to rip up.
Solution: Make moderate cuts in calories. A 10% reduction in total caloric intake will suffice.

2 Don’t Swallow The Extreme Protein Myth
It’s no myth that when you drop your caloric intake, you need more protein. The extra protein is burned as fuel, preventing a loss in muscle mass while you diet. But many bodybuilders go to ridiculous extremes, taking in much more protein than they need.
Solution: As a rule of thumb, eat no more than 11⁄2 grams (g) per pound of bodyweight when dieting. Take in more than that amount, and it will likely be stored as fat, preventing you from getting as ripped as possible.

3 Don’t Fear Carbs
Carbs are both friend and foe. They help build muscle by creating a proinsulin environment; yet, elevated insulin levels can obstruct the loss of bodyfat. The latter fact leads many trainers to opt for a low-carb diet. When carb intake falls, the body begins to burn fat as fuel.
Unfortunately, eating too few carbs will cause the body to melt away muscle mass along with bodyfat.

Solution: Consider 1 g of carbohydrates per pound of bodyweight to be a low-carb intake — enough to cause fat loss, but not so low that muscle will be burned.

4 Don’t Overlook Carb Timing
Simply dividing your total carb intake into five or six servings a day is a step in the right direction, but reports from top bodybuilders indicate that eating carbs in the day’s final meal prevents maximum fat loss.
Solution: Skip the carbs at your final meal; instead, eat more of them after you train and at breakfast.
These are the two meals in which you need more carbs. In the morning, a greater portion of your carb intake is stored as muscle glycogen rather than as bodyfat due to lower glycogen stores and greater insulin sensitivity. The posttraining meal requires a carb burst to offset potential muscle breakdown as a result of training. Carbs taken in after training help build muscle, not bodyfat.

5 Don’t Overdiet
We know that performing too many sets and training too frequently can lead to a loss of muscle. The same principle is true with dieting. When you diet 24/7 without taking a break, your metabolic rate tends to head south. If that happens, getting ripped becomes a challenge.
Solution: During bodyfat reducing phases, try a four-on/one-off approach. Diet strictly for four days, eating 1 g of carbs per pound of bodyweight daily and taking in no carbs at each day’s final meal. On the fifth day, take a break from dieting. Dramatically increase carb intake, up to as much as 3 g per pound of bodyweight on that day. The higher carb intake not only will provide much-needed energy, but it will also prevent a drop in metabolic rate.

6 Don’t Overdo Cardio
The two primary ways to rip up are by eating fewer calories and expending more calories through aerobic exercise. Although cardio can be effective, performing too much of it can cause a drop in testosterone levels, which affects your ability to retain muscle.
Solution: Hit a bike or treadmill no more than four times a week for 30-40 minutes per session.
That should be sufficient to burn away fat without causing a drop in testosterone levels or leading to an accommodation in metabolism.

The best fat-loss supplements are ephedra/caffeine-based products. However, many dieters begin using them too soon in their contest prep and fail to realize to what degree these supplements are working. Is the ephedra/caffeine mix leading to a pound of fat loss each week, or is it the diet? And if it’s a combination of the two, what part of that fat loss is attributed to the supplement? Solution: Reserve ephedra/caffeine products as “finishers” to be used during the final six weeks of contest prep to help to continue burning fat from stubborn areas, such as quads tot females and back for males.