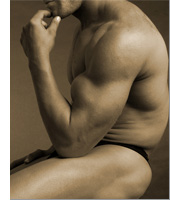 Many experts recommend cycling creatine. They recommend that you load up with 20 or 30 grams per day for five days, take a maintenance dosage of five to 20 grams for two or three months and then discontinue it for a month or two. Many athletes believe this is the only way to take creatine. This is a fairly closed-minded approach. There may have been a few reasons for getting off of creatine that were justified years ago but they are not justified now. Many years ago, there was some legitimate question concerning the safety of creatine. Some people with various muscular diseases had used creatine for years without any apparent side effects but at that time, there had been no specific, organized study of potential side effects over the long haul (over six months).

Because of this situation, it may have been prudent advice to take some time off creatine. That way, if it did have any negative effects on the body, there would be time between cycles for the body to readjust. Now however, according to the American College of Sports Medicine’s roundtable meeting, there isn’t any definitive scientific evidence that creatine is harmful. One study even found creatine to be safe when subjects took it for up to five years and as much as 80 grams per day!

So if creatine caused cramping, upset stomach or other negative side effects, one of the hundreds of studies would have shown this effect by now. These days, people who question the safety of creatine simply don’t have any good evidence to support their statement – that is a scientific fact. Actually, in some studies, the “placebo” group (that didn’t get creatine) had more of these supposed side effects than the group that got the creatine. Thankfully, even some of the mainstream media, such as The Associated Press have now reported that creatine actually decreases risk of injury – referring to a study that showed that college baseball players using creatine had, “fewer cases of muscle pulls or strain, missed practices due to injury, and cramping.”

Another reason cited for taking time between creatine cycles was the theory that it would cause downregulation of the creatine transporter. That just means that some people thought that if you take creatine continuously, the body would react by slowing down the body’s systems that carry creatine into the cell. Some (maybe most) sports nutrition “experts” even talk about downregulation of creatine transporters like it is a fact of life that has been proven.

The truth is, it was never more than a theory. It came about as a result of a study done on rats in 1988. In this study, researchers bathed rat muscle cells in creatine and it caused the creatine transporters to be downregulated. So the creatine downregulation theory came from studies on chopped up rat muscle in a petri dish. Any scientist will tell you that just because something works in rat muscle that was dunked in creatine does not prove it is so when humans take creatine by mouth – I mean, a rat can’t drive a car either but that has very few implications for humans.

All this rat muscle study tells us is that massive amounts of creatine downregulate the creatine transporter under some circumstances in rat muscle. Fortunately, a study was done in humans a few years ago. It turns out that when human subjects were given creatine for eight weeks, they experienced no decrease in creatine transporter number. This information should have ended the downregulation myth but it hasn’t been reported widely. So many bodybuilders out there are still under the mistaken impression that creatine causes downregulation. By the way, this study was done in the laboratory of Dr. Mark Tarnopolsky, who is one of the most highly respected creatine researchers in the world, so we can be pretty confident that it is accurate. So the research shows that creatine is safe and that supplementation with creatine doesn’t diminish the number of creatine transporters.

When to Take Creatine
The final question with regard to how to take creatine is when to take it. Well, it takes several days to load up the muscles with creatine and it takes weeks for creatine levels to return to normal once you stop taking it. So each dosage of creatine only increases creatine levels in the muscle to a very small degree. The best time to take creatine is probably immediately after a workout and in the morning when your insulin works most efficiently. You see, creatine stores in muscle are heavily depleted after exercise and the body has a clever habit of replenishing things best when levels are low. This seems to be the case with creatine. In one experiment, when athletes exercised one leg and not the other, the exercised leg stored much more creatine than the sedentary one.

Types of Creatine
This has to be the most controversial creatine topic because some companies are selling millions of dollars/pounds worth of fancy new creatine products that may not be any better than plain old creatine monohydrate. The evidence for many of these new creatines isn’t very strong and in most cases, doesn’t exist at all! Here’s one important fact that everyone should know about creatine and that is that regular creatine is absorbed virtually 100 percent from the digestive system. There is research from as far back as 1926 showing that when you take creatine, it doesn’t get excreted through the digestive tract (in the feces), it gets absorbed into the blood. No credible creatine researcher would argue with this statement and anyone who tells you another story simply doesn’t have his facts straight. I don’t mean to sound harsh but it really is that simple. This may not sound like a big deal but it has two extremely important consequences for creatine users. First, this means that all of the creatine products on the market that try to convince you that they are “absorbed” better than regular creatine are based on a flawed assumption – let me say it again, creatine is absorbed virtually 100 percent from the gut. The second consequence is that the only way to increase creatine retention is to increase the uptake or absorption of creatine from the blood into the muscle. That can only be done through increasing the levels or efficiency of certain hormones like insulin or certain cellular transporters. I’ll discuss how this can be done after we’ve looked at a few more fascinating facts about creatine.

Liquid Creatine
This brings us to a very controversial supplement – liquid creatine. Despite the fact that the world’s most knowledgeable experts continually tell the public that creatine cannot be stabilized in liquid, people are still buying these products. These companies have come up with a variety of reasons why their liquid creatine is better than powder. Let’s examine some of these. One company has stated that, “Creatine powder is highly insoluble, so athletes must ingest large amounts in order to have any reach their muscles.” and “passes right through your digestive system.”

Now let’s analyze these statements. Saying that, “Creatine powder is insoluble”, is meaningless to an educated creatine user. Many things that we eat are insoluble. If you put a teaspoon of oil in water, you can stir that water as much as you want but the minute you stop, the oil will settle on top of the water. Does that mean you can’t absorb oil? Of course not – because substances don’t have to be soluble in water to be absorbed by the digestive system! If they did, we would all be dead. Remember, creatine is absorbed into the bloodstream from the gut with virtually 100 percent efficiency!

So are there any scientific studies on liquid creatine? Actually, there’s one. At the Experimental Biology Conference (one of the biggest annual scientific conferences in the world) a few years back, a research group presented a study that tested a liquid creatine product. Testing was done to find anything related to or containing creatine. They even tested for nitrogen, so if creatine or anything resembling it was in the product, they would have found it because you can’t make creatine without nitrogen. The result? Less than one percent (below 10 milligrams) of the label claim for creatine was found in the product.

This means that you would have to take 500 servings of this product to get one regular serving of creatine! On the other hand, they found almost ten times that amount of creatinine (the useless metabolite of creatine). This is not surprising because creatine gradually breaks down into creatinine in liquid. Just for kicks, the researchers also tested the product on human subjects to see if it increased blood levels of creatine – it didn’t. No less than ten other tests have been done on this and other liquid creatine products and virtually all of them show that from 73 to 100 percent of the creatine has degraded to creatinine. So there is now little doubt that liquid creatine is a scam! However, a few supplement companies have come out with new liquid creatine products recently that they claim are stable, so we’ll have to see if they have more luck delivering an effective product to the consumer than past efforts.

Here is an example of scientific-sounding hogwash that some of these companies have come out with in the past. One compnay used to state on their website: “excess amounts of creatine powder precipitate out into the liver and kidneys, creating a potential of long-term side effects.”

Let’s look at this statement. Besides the fact that they can’t seem to use proper grammar, there is no evidence to support it. Creatine doesn’t “precipitate out into the kidneys”. Actually, it’s hard to tell what that statement even means. We do know for a fact that creatine (and its metabolite creatinine) is excreted by the kidneys in all healthy people – regardless of whether they supplement with creatine or not. We also know that creatine has existed naturally in the human food supply since we lived in caves and dragged our knuckles on the ground when we walked! So this statement is meaningless and inaccurate.

There was one statement on the website that is probably true about this creatine product is that it: “will not cause water retention” Why would it cause water retention when there is virtually no creatine in the product? You see, creatine may work in part by causing the muscles to absorb more water, although this is controversial. More water in the muscle is associated with more protein synthesis (muscle building). In studies where water retention was observed, it was not under the skin or in the fat cells, it was in the muscle! However, this is a minor point because recent research concludes that creatine causes actual muscle fibre growth – with or without water. So liquid creatine products have tried to reinvent the wheel but unfortunately, because they didn’t know the facts, they made the wheel square.