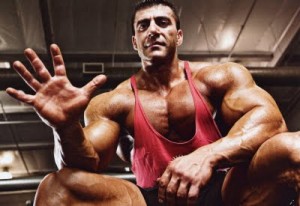 It’s Saturday, September 30, and inside Orleans Arena, things are heating up faster than a Terrell Owens-Donovan McNabb reunion, as a lineup of the world’s best bodybuilding talent waits to take the stage for the final callout of the 2006 Mr. Olympia. One by one, they slowly saunter out under the bright lights of center stage. Ronnie Coleman. Jay Cutler. Gnter Schlierkamp. Gustavo Badell. And . . . you?

Wake up, rookie  in all likelihood, that;s not going to happen. We’re not here to squash your dreams, but, chances are, if you’re over 25 and have never thrown your hat into a competitive ring, you’re never going to find yourself on the Olympia stage standing shoulder to shoulder with the sport’s royalty. That doesn’t mean you can’t dream big in terms of trying to get into your best condition possible in a reasonable amount of time  isn’t that what it’s really about for most of us, anyway?

Without years of trial and error, you’ll need some guidance to get on the right track. That’s where Mark Dugdale comes in. Dugdale, who earned his pro card after winning the light-heavyweight and overall titles at the 2004 NPC USA Championships and has finished in the top 10 in each of his four professional shows, brings 13 years of contest preparation to the table. He’ll walk you through the ins and outs of what it takes to shed bodyfat without losing valuable muscle mass.

STEP 1
WORK YOUR WAY UP TO EIGHT MEALS A DAY
Don’t begin a get-lean diet by completely overhauling your nutrition habits overnight. Instead of diving into the deep end right away and drowning in the monotonous and difficult aspects of a full-on competition-style diet, Dugdale, who eats about 10 small meals a day, suggests that you start by adding just one or two meals to your daily total. If you’re eating four right now, bump that to five. If you’re eating five, increase it to six.

If you tell somebody who is eating three or four times a day to eat seven to 10 times, they’ll do it for a week and it won’t work, Dugdale explains. The goal is to eat eight times a day or so, but don’t just jump to eight if you’re not close to that. The key is to have smaller meals but to eat more of them.

Think of your body as a furnace. Put in just enough fuel to keep it stoked, and you’ll expend calories throughout the day, your metabolism will remain ramped up, and you’ll be on your way to Rippedville, USA. The more muscle you have, the more calories you burn, Dugdale explains. You need your metabolism to cruise, and the only way to do that is by eating frequent meals. If you cut down on the frequency of your meals, that slows down your metabolism.

STEP 2
REDO YOUR RATIOS
Everybody always says, a calorie is a calorie,  but I don’t believe that entirely, Dugdale says.    Protein has a thermal effect because the body burns calories just to digest protein  unlike fat, which gets stored real quickly if you take in too much. He recommends crafting a plan in which you’re getting roughly 55% of your total calories from carbohydrates, 40% from protein and 5% from fat. When choosing carbs, avoid those that rate high on the glycemic index (go to www.mendosa.com for those ratings) and in turn raise your blood-sugar levels. When your insulin levels spike, you essentially can’t burn fat because your body is in a state of storage. I�d stay away from quick-acting carbs unless you’re getting them immediately after you work out.

In terms of total caloric intake, start at 15 calories per pound of bodyweight per day and, if you need to, adjust that up or down 200 calories each week until you reach a point where you’re losing weight. For example, over the first six weeks of a 15-week period during which Dugdale diets down from 225 pounds to his contest weight of around 200, he takes in an average of 3,100 calories per day. A general rule of thumb is that you don’t want to lose more than a pound to a pound and a half per week, Dugdale says. Anything more than that and you start tapping into muscle. Get a baseline diet going for about three weeks, and monitor your weight and the scale. Adjust from there, up or down, depending on your progress.

STEP 3
CUT THE CRAP
Like Courtney Love at an open bar, some things should be avoided at all costs.

At the top of the list, of course, is alcohol. The other main things are high-fructose corn syrup, saturated fats and trans fats, Dugdale says. It seems like most food manufacturers are getting better at omitting those from their products, though.

Dugdale targets breads and pasta as carb sources of which to steer clear. Literally, when I’m dieting, my only two carb sources are oatmeal and brown rice, he says. For variety, choose red potatoes or sweet potatoes.

STEP 4
COOL OFF
Since you’ll be eating so frequently, it’s important to not get caught without the most vital component of the plan  food. If you’re working an eight-hour shift, you’ll likely need to bring three or four meals to your workplace. The best way to do that  other than alienating your coworkers by shoving an entire refrigerator shelf of their food into a trash can to make room for your supply  is to pack your meals in a cooler.

I bring a cooler to work, Dugdale says. One of those cooler bags for four lunches and two protein shakes would work.

If you’re in a pinch and faced with skipping a meal, stop in at a nearby convenience store. Beef jerky is quick and convenient, Dugdale says. They also sell tuna in shelf-stable pouches that is good on crackers.

STEP 5
KNOW THERE�S A LEARNING CURVE
News flash: everybody is different, and every body is different. We can give you a guideline, but finding out what works and what doesn’t to fit your specific goals and needs is ultimately up to you. Plateaus are going to happen, it’s the nature of the game  don;t get discouraged if your progress slows down as you move further along on your diet.

Dugdale suggests using the first four weeks as a period to find out what your baseline calories are. After that, adjust your diet accordingly, and the changes should be visible.

The beginning is always the most dramatic, but as time goes by and you get leaner, making improvements gets tougher, Dugdale says. Sometimes it’s just a matter of patience, waiting for your body to change. This can take three weeks or longer doing the exact same program before you see additional results.

SUBSTITUTION SOLUTIONS
Dugdale’s sample diet is admittedly monotonous. For him, his physique is his living, so he sacrifices variety for proven nutritional intake. For the rest of us, though, using food substitutions  for sanity’s sake, if nothing else  will still give the intended results. Here are some suggestions.