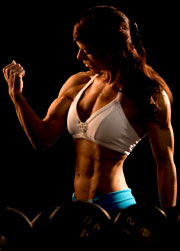 Women bodybuilding and women sports have hit the limelight in the World sporting arena, as more and more competitive and talented sports women continue to enthrall views through their performance. As competition increases, there has been an increased trend shown among women, to resort to supplements and performance enhancers.

Not only athletes, there has been an increased trend among women, to attain a good physique and improved body fitness. Women have realized that a good health regime results not only beautiful bodies, but also a chance to go about ones daily chores with ease and be at a lesser risk to suffer from Osteoporosis, Diabetes, Heart disease and Arthritis.

The natural question which arises is, how protein supplements like Creatine, which provide energy and increase body mass, affect women, and whether users face any side effects from use of such supplements. Side effects of steroids include, higher levels of testosterone, which in women may lead to “male-like” characteristics, like deepening of voice, and increase of facial hair. The good news is that Creatine isn’t an anabolic steroid, in fact it is not even a synthetically created compound. Creatine, naturally occurs in the body of humans, and acts as a source of energy. The bad news is, that though creatine supplements marketers claim that it doesn’t have any side effects, reports from women indicate that creatine users suffer from stomach cramps, muscle cramps, nausea and diarrhea.

It has been proved that women naturally have a higher resting level of Creatine than men, in their body. This has been found to be the reason why creatine shows time to show visible effects in women. A delayed effect sometimes results in more creatine by women. Unconfirmed reports state that excessive creatine intake causes bloating of the skin, and other gastrointestinal disorders. It is advised that women, when taking creatine, should take creatine designed specifically for women. It It is also recommended that women keep a check on the dosage of creatine, taking 3-5gms per day. Men who naturally have lower levels of creatine can take higher dosages. This minimizes any side effect, whether confirmed or unconfirmed.

Women on creatine have also reported a higher level of urination, specifically during menstrual periods. This has been attributed to excretion of creatine from the body. Pregnant or nursing mothers are recommended against the intake of creatine, since conclusive studies haven’t been completed on the effect of creatine on breast milk and any effect on the new born child.

According to a particular research report, when the effect of creatine supplementation on protein metabolism was examined in twenty seven young and healthy men and women, it was found that benefits among female test participants were marginal. Be that as it may, more and more women from all walks of life are recognizing the benefits of a good physique, and are taking protein supplements with training. The production of women-specific health supplements is proof that the industry is giving considerable importance to this segment. An additional good news is, that continued research on the benefits and risks of using creatine have shown that it mostly has minor side effects which too, can be removed with dosage and dietary modifications.