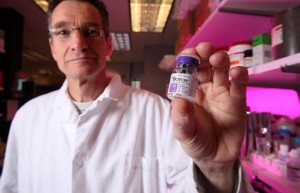 Dr. Walter Herzog, holds a bottle of Botox in his lab at the University of Calgary on Thursday, December 2, 2010. Herzog has completed new research that shows that over time botulinum toxin A use results in muscle weakness, atrophy and loss of contractile tissue in non-injected muscles far-removed from the injection site.
CALGARY — Botox may be used to help smooth out wrinkles and give children with cerebral palsy more control over their muscles, but the injections themselves could be responsible for causing muscle weakness throughout the body, according to researchers at the University of Calgary.

A study soon to be published in the Journal of Biomechanics found that six months after rabbits had been given botulinum toxin A, they experienced muscle loss and atrophy.

And these side-effects weren’t limited to where the Botox was injected, said Rafael Fortuna, a kinesiology master’s degree student and lead author of the paper.

“Botox doesn’t seem to stay at a very specific site. It can affect muscles far away from an injection site,” said Fortuna.

But this latest study he has overseen shows muscles that are working normally elsewhere in the body can also lose muscle mass and structural integrity.

Botox is commonly used as a cosmetic treatment. For example, the drug is used to paralyze small muscles in the face to reduce the appearance of wrinkles.

It is also used for the treatment of children with cerebral palsy.

Nerves that send signals to a specific muscle causing it to remain clenched are blocked by Botox, giving the patient more control over their limbs, said Herzog.

Mezaun Evin’s daughter Shari, 21, was given Botox 10 years ago to help relax her elbows, which were always tensed upwards.

“For her, it was the difference between getting her clothes over her arms or not,” said Evin, associate executive director for the Cerebral Palsy Association of Alberta.

The series of three Botox injections were far from a “quick fix” for Shari’s cerebral palsy, said Evin. It allowed physiotherapists to work with her daughter on exercises with these “spastic” muscles to try to permanently improve her mobility.

Evin wasn’t surprised by the research results highlighting possible concerns for Botox treatments, but noted that for many cerebral palsy patients the drug remains one of their last alternatives.

Both Herzog and Fortuna agree the use of Botox for cerebral palsy should continue, but said long-term consequences must be evaluated before the treatment is given.

“If I had a child with cerebral palsy, I would absolutely use it if I was convinced by the doctors that, yes, this would be a good treatment application,” said Herzog.

“At the same time, I would never ever use it as a cosmetic. I would never agree to that. It is a poison that goes into your body.”