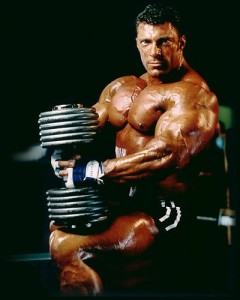 BSN has signed Bob Cicherillo! Bob (pictured on left) signed at the Europa Expo alongside BSN® co-founder Scott James! Bob is a veteran of the bodybuilding and fitness industry and the Athlete Representative for the IFBB! His outgoing attitude will serve him well in his new role as spokesperson for BSN. He is also currently the host of the annual Mr. Olympia competition, and also the voice of the hit radio show and podcast “Pro Bodybuilding Weekly.”

But despite all the ties to the industry and experience as a company spokesman, according to BSN’s press release, this partnership with BSN® marks the first time Bob has ever signed with a nutritional supplement company. But I thought he was once with GNC and was paid as a spokesmodel to endorse their Pro Performance line?

“BSN® represents the pinnacle of the industry, in terms of their innovation, their cutting-edge approach to product development, and just the overall coolness of the company,” Bob explains. “It shows up in everything they do, from the ad campaigns, to the apparel, to the innovative new supplements they’re always coming out with. It’s just a great company.”

With Bob moved from LA to Florida in the last year or so which makes for a perfect synergy with BSN since BSN is based in Boca Raton Florida. Congrats to Bob and the team at BSN.