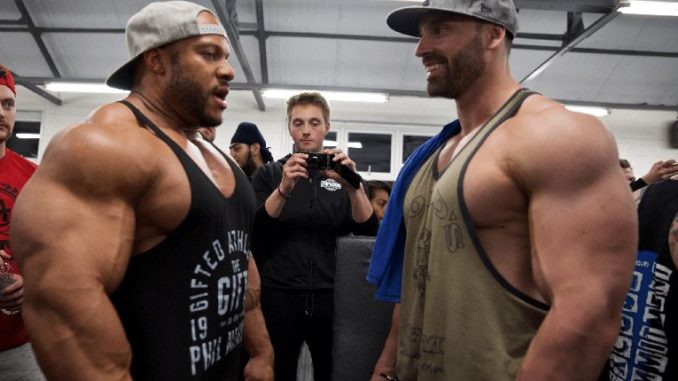 Bradley Martyn is the name that always should be written in upper case like BRADLEY MARTYN since you just can’t write his name with small letters while that’s a guy so huge! and that’s because this is one of the very few guys on the planet who can stand next to Phil Heath and you still do not look small. There are extremely few people out there who can be proud about it.

Bradley Martyn it is the alpha male standing on the top of the male species. He is really tall, he is having huge muscles and he is also really handsome (no homo here). And this guy is super strength. The guy that should be playing Superman. He can comfortably bench press 405 lbs with a close grip!

He has his own youtube channel (with more than 2 million subscribers) and Instagram account and Facebook account with nearly 3 million followers/ likes on each account. This guy is extremely popular and if you have ever seen any of the videos he has on YouTube, you should know that he comes around as a very honest and inspiring character out there. He was not posting any videos on YouTube until the late of 2014 and as soon as he started doing it – he got famous very and very quickly. In around 2 years only he got more than 2 million likes on his Facebook account. No wonder why – the guy is indeed among the closest to strength of Superman. Here are his stats – at a height of 6 ft 3 he is weighing 260 lbs (around 118 kg) and all of this at the body fat of approximately 7 or 8%.

Since he’s such a beast, there are a lot of people who think that he is taking steroids. There are only a few people left out there who are still believing that he could be a natural guy who has got the genetic stuff to a whole new level. The guy has indeed got great genetics, a guy with average genetics can workout 24/7 and eat steroids like Cheetos and still won’t become as huge as Bradley is. But, we decided to check if steroids have accelerated the raise to fame for Bradley.

Bradley Martyn was born on the 22nd of May 1989 and he is saying that he started to lift weights when he was around 15 or 16 years old which means he started to lift weights around 2005. So, 6 years later in 2011 he was already competing in a NPC bodybuilding show which means that he was 22 years old and has already been an experienced lifted having approximately 6  or 7 years old of training which means that he already plateaued from newbie gains, therefore his gains should be really small after this period.

So, natural guys who are having great genetics are getting huge from a very young age in the first months of lifting weights. The reason is because their bodies are responding abnormally when they are starting to lift weights so they are experiencing some huge amounts of growth very quickly and that’s thanks to their superior DNA. A good example of that is Mike O’Hearn who is a good example of that, he was looking like an absolute beast at only 14 years old. Nonetheless, after that newbie growth period, Mike didn’t grow much at all. Mike got huge as soon as he started to lift weights and then he was playing around with body fat.

There’s no doubt that Bradley Martyn has some very good genetics as he has built a very good body physique already in 2011, nonetheless, he didn’t stop and he continued growing and got extremely huge since then. That’s not normal for a natural and that’s a sign that he indeed used steroids. 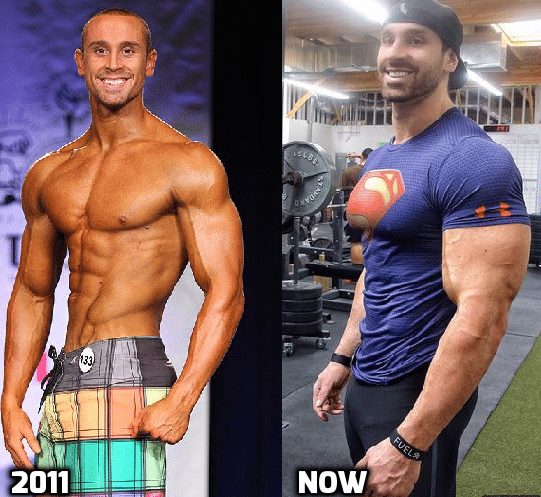 An experienced natural bodybuilder is a plateaued bodybuilder who doesn’t see any much growth in muscles even after many years of training. But a guy like Martyn has already been lifting weights for like 6 years or so and yet he suddenly blow up like that, that’s something extremely unnatural and very unlikely to happen for a natty. Therefore, Bradley Martyn is nearly surely using steroids.

He has Insane Muscle Thickness 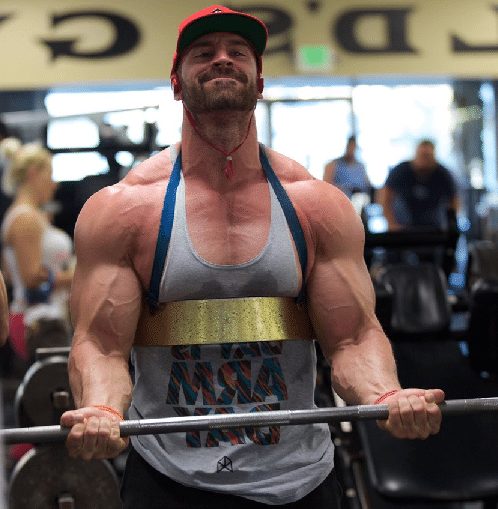 The reason why there are still some people who are thinking that Bradley is all natural is because Bradley’s body is generally having a natural look to it. But steroid users can get this naturally looking effect to their bodies if they are using steroids wisely.

Nonetheless, there’s still a visual steroid symptom which really stands out to me by looking at his body which is making the steroid use obvious for him – Bradley’s insane muscle thickness, something that a natural bodybuilder is very unlike to have. Chul Soon is another bodybuilder which is having that extra dimension of thickness and this is being caused by certain steroids, but mainly and most famous for doing it is Deca Durabolin. This steroid is very well known for creating exceptionally round and full muscle bellies as seen in both Chul Soon and Bradley Martyn. There are a lot of photos you can see online where Bradley’s arms/ shoulders and traps look mega thick and juicy. These muscle groups look the most thick and juicy since they are having most androgen receptors which respond to anabolic steroids as Deca Durabolin.

There are also photos online of Bradley where is looking very flushed to his skin. That’s often associated with steroid use because a lot of steroid users are experiencing it and it was found out that it is thanks to the fact that AAS is elevating your body temperature. The body tries to cool it down by  a higher blood pressure and pushing veins close to the surface. Hence the flushed skin effect. There are photos of him when his body isn’t only pink, but he actually has a bright red look. Here’s an example: 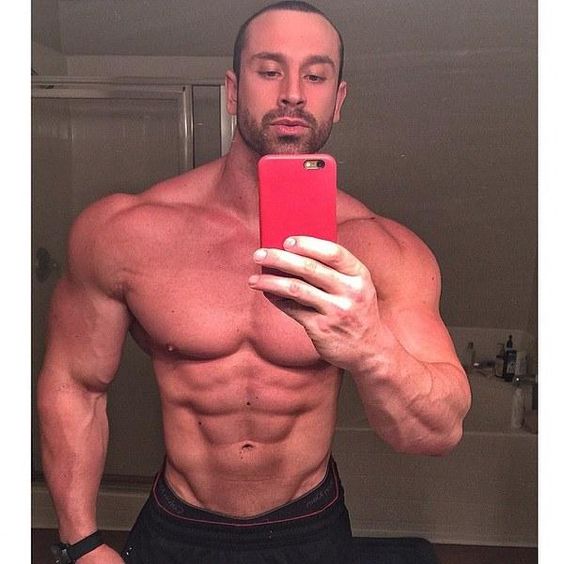 Bradley Martyn is known that he has previously competed with the NPC federation but before saying if the drug testing is legitimate we need to check what it is the NPC’s drug testing policies. There are other guys that I have analyzed in the past which have also competed in the NPC, for example is Kali Muscle, but in the end it turned out that Kali Muscle did used steroids. So, by doing a bit more research I concluded that in short, NPC it is a bit of a joke.

The NPC show is claiming to have “natural bodybuilding shows” and yet, they are not having any drug testing information on their website. But doing more research on their drug testing information from outside sources I have managed to find people who have actually competed in their shows and from listening to them you can see that they say only some competitors do get drug tested, but those are some extremely easy tests to pass even if you are juicing. So, not all competitors get tested and even those who do can pass them being on steroids. What’s the point calling yourself a “natural bodybuilding show”?

The competitors need to stop running their steroid before the competition in the so the steroids can pass the system and at the end of the competition you would pass the test (IF you would be tested). And even if you still somehow manage to fail such type of tests (which are extremely easy to pass) then nothing happens. I mean, you just don’t win the championship but nobody would actually find out about this as they do not have any “hall of shame” pages on their site like strict federations do in order to keep your credibility intact.

All in all, Bradley Martyn has a competition history that can’t say anything about the fact either he did used steroids or not and that’s because he competed in federations that are not legit in terms of drug testing.

Well, I guess you’ve already guessed it – my verdict is that he is taking or at least took steroids after 2011. My verdict is based on the evidence – he had abnormal huge muscle gains for a guy is not taking steroids and he has a few steroid symptoms. My verdict of natty is given to those guys where I fail to find any evidence proving that they take steroids, but I found 2 of them for Bradley Martyn.

Yet, this guy is worth of respect. He has the philosophy “the bigger the better” and not everyone agree with this – this is his own decision. Plus, he is not denying taking steroids on social media as other juicers do and this totally makes sense to me because there are several signs of steroid use present for him. He doesn’t come out and telling everyone he uses steroids and I guess he doesn’t want to advertise it, especially because he knows that he has around 3 million of fans watching him. If he would come and say it flat – I take steroids, a lot of his fans may want to follow his actions, something that he won’t want to do.

Plus to that, remember that simply taking some steroids is not automatically going to make you look like Bradley Martyn. He has a strong genetic pool and if you’re not going to use steroids wisely and without having a world class genetics as he does, you won’t be looking by far as him. Plus, there are millions of juicers who are not even half as Phil Heath is while Bradley is among very few people who can stand his place near Phil without looking like half a human.

What Potential Steroids he has Taken?

Checking his symptoms and his growth, I think that this guy has grown that much thanks to dianabol and thanks to deca durabolin. As I earlier mentioned, Deca Durabolin is most likely the cause of Bradley’s super thick looking muscles as we can see. In addition to that, Deca is giving you some amazing strength gains and this is what is explaining his hulk like strength and impressive lifts he can do. This stuff is super famous among juicers and in fact, it is being rumored that it was used by some old greats such as Arnie, Sergio Oliva and Mike Mentzer.

Usually, it is the super dry look (extremely shredded) which very often can make it very easy to spot the steroid users.

And yes, about deca and dianabol – these are the 2 steroids which is thought that Arnold Schwarzenegger has been using in his prime during the Mr Olympia contest. I do think there’s a high chance this is true (both that Arnie and Bradley took them together) since Bradley Martyn’s current muscles are having a very similar look to what Arnie’s been looking back in the 70s. So, by taking deca and dianabol together you can have huge strength and size gains. But don’t forget the genetic factor and the push to the limits factor. Even with great genetics, you need to work hard in and out of them gym in order to fulfill the genetic potential. After fulfilling it and getting huge AND taking this deca and dianabol cocktail then you can look like Bradley Martyn.

Write below in the comments what is your opinion about Bradley Martyn. Special thanks to these sources which greatly helped me in writing this article: