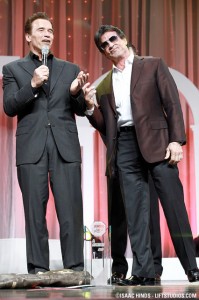 Winning an unprecedented fifth Ms. International title hung in the balance as four of the top six took their place to the side of the stage, leaving Yaxeni Oriquen-Garcia and Iris Kyle alone. Both women have been dominant in their sport, especially in Columbus with four wins apiece.

As the crowd awaited Lonnie Tepper’s announcement on who would be the runner-up, both women had a moment and exchanged a few words. “We said congratulations, we both look great and we love each other,” Kyle recalled.

Oriquen-Garcia’s name was the one called, and Kyle once again found herself on top of the women’s bodybuilding world. She was presented with $25,000, a Tony Nowak jacket and the first place trophy by not only Arnold Schwarzenegger, but actor Sylvester Stallone. A star-studded special evening, indeed.