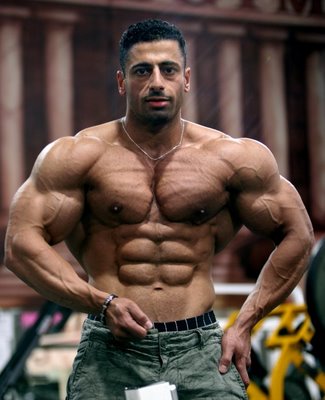 With his second at this year’s Phoenix Pro 202, Swedish resident Ahmad Ahmad established himself as one of the world’s premiere 202 competitors. Ahmad’s shoulders are a strong point, so we got him to tell us the key to his delt work and delineate a typical shoulder routine. Ahmad hits shoulders before triceps once every six days.

“Make compound exercises, like Smith machine presses and dumbbell presses, the cornerstones of your shoulder routines. These are key to building mass. I like to pyramid the weight up to a maximum set of six reps on the basic presses. Don’t mess around too much trying to find weird shoulder exercises to target a specific area. Make your priority engaging the entire shoulder region and focus on building mass. Details will follow.”

NOTES: Swedish resident Ahmad Ahmad won the 2008 Los Angeles Championships and placed fourth in the 2009 Pittsburgh Pro 202. He precedes this routine with warm-up sets of front raises and side laterals, and five to 10 minutes of stretching. Precontest, he substitutes cable laterals for dumbbell laterals, A training partner to assist on forced reps, deep tissue massage and posing practice are all important for maximizing his delt development. Ahmad trains shoulders before triceps once every six days.