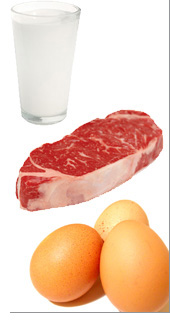 The following article will address the information that every person who trains hard and wants maximum results should know about protein. In fact, if you don’t know this stuff, you’re just going to waste your money blindly choosing supplements based on hyped-up advertising and suspect information churned out by various “experts”. The only way to defend yourself (not to mention your muscles and your pocketbook) from these clowns, is to get informed – “knowledge is power”.

This is very important, because, believe it or not, very few people who claim to be experts in this industry actually have a degree in nutrition. If you think about it, that’s amazing! You are reading articles about “nutritional” supplements in the magazines and websites that have been written by people who have never been formally taught about nutrition!! Would you read articles about medicine that weren’t written by doctors if you were investigating which medication to use? Would you read articles that weren’t written by qualified architects if you were trying to build a skyscraper? So I hope by this analogy, you can see that a lot of what you think you know about sports nutrition and supplementation may not actually be on the level.

In this series of articles, I’m going to go beyond the basics about protein , fats, carbs, vitamins, etc, I’m also going to cover how supplements like creatine, whey protein, arginine, chromium, essential fats, CLA, HMB, maltodextrin, etc are really just nutrients found in food (albeit in small amounts in most cases). Then we can look at what the arguments are for supplementing them and a few basics about how they are produced, how they work and the different forms available. Along the way, I’ll also sort out the facts and get to the real truth about some of the myths and conflicting information you hear about nutrition and supplements. I’ve been around a long time in this industry and I know all the scams, so I can just about guarantee that you’ll pick up some interesting information that you haven’t heard or considered before. So go on, take 15 minutes, read this article and stop being a victim and start getting some major results from your nutrition and supplement plan.

As most people who train with weights know, protein is the single most important nutrient for building muscle. In fact, once water is accounted for, muscle is made almost entirely of protein. It is of primary importance in the growth and development of virtually all body tissues including hair, nails, blood and skin and provides the building blocks of hormones and enzymes that control the growth and other workings of the body.

What Foods Contain Protein?
Most foods contain some amount of protein (with the exception of most fruits and some vegetables). The best sources of protein are from animals – meat, fish, milk and eggs. Only a few non-animal sources of protein are adequate to support muscle growth on their own – one is soy protein isolate but it has a few “issues” of its own.

What Else is in Protein Foods – Vitamins, Minerals and Creatine!
Red and dark meats are uniquely good sources of iron in its most absorbable form (heme iron). Meats and fish also contain magnesium, potassium and zinc (which is crucial for testosterone function and immunity). Meat is also a great source of B vitamins – essential for energy. It also contains creatine – probably the best sports supplement of them all! If you haven’t heard of the proven effects of creatine on muscle strength, power, growth and endurance, then you must have been living under a rock for the last decade. But did you know it was first discovered in meat? In fact, very large intakes of some meats and fish can provide performance-enhancing amounts of creatine in the diet. For example, eat a pound of herring a day and you would be creatine loaded in one month – yeah, I guess that’s why most people just use supplements. Joking aside though, a good bodybuilding diet, high in animal foods would contain about 2 grams of creatine a day.

How Important Is Protein?
Protein is essential – Humans can live without any carbohydrates and only a tiny amount of certain essential fats are required for life but without adequate protein, you eventually die – just think how much that’s going to mess up your one-rep max on the bench press! The reason for this is that certain amino acids cannot be made by the body in sufficient amounts. There are 20 amino acids that the body uses to make tissues like muscle, skin and other organs and nine of them must be supplied in the diet (the body can make the rest itself). These nine are the “Essential Amino Acids” (EAAs) – yes, the same ones you can buy in tablets from most sports supplement companies! For those who are interested, they include valine, leucine, isolucine, lysine, methionine, threonine, phenyalanine, tryptophan and histidine.

If inadequate amounts of one or more of these amino acids are supplied in the diet, growth and repair of muscle will come to a halt. It would be like trying to spell a long word and not having one or more of the necessary letters. You would have to wait until the necessary letter became available. This is obviously just about the worst scenario a bodybuilder can imagine.

Other amino acids like glutamine and arginine can be considered “conditionally essential”. In other words, they are required in the diet in times of physical stress or growth…and there is a good argument to be made that hard-training bodybuilders are under increased physical stress and they better be growing because that’s the name of the game! Arginine is also required by the body to produce Nitric Oxide, which is a supplement category of its own now (and one that I personally helped introduce to the market).

Amino Acids
Glutamine: This is the most prevalent amino acid in muscle and the blood(1). As previously mentioned, this amino is considered “conditionally essential”. This means that in some conditions, it may be required in the diet to satisfy the body’s needs. As such, it has been used successfully in hospital settings especially for burns and post surgery. In one study, by simply adding this amino to a patient’s diet, survival rates increased dramatically. Glutamine has significant cell-volumising effects, so that it may be a good nutrient for making the muscles look fullerCell-volumising refers to increased filling of the cell with liquid and nutrients and this has been demonstrated to potentially increase protein synthesis and growth(6). Also, glutamine can be metabolized into other important amino acids like arginine.

What about Branched Chain Amino Acids (BCAAs), Leucine and HMB?
You may have recognized a few of these “EAAs”. That’s because Included amongst the EAAs are the Branched Chain Amino Acids (called BCAAs) – leucine, isoleucine and valine. Again, these are the BCAAs you can buy in tablets and they are probably the most important “Aminos” to grow and maintain muscle. Leucine is especially powerful. It has been shown in a number of research studies to literally be involved in “switching on” protein synthesis. In fact, HMB (Beta Hydroxy-Beta-Methylbuterate) is a close cousin (known as a “metabolite”) of leucine and this could be the reason it has shown muscle-building effects in some (but not all) studies. Now a new category of leucine products like Leukic has emerged! See my article, “Leucine – The Special One” for a more detailed discussion.

Protein Quality – Are Some Proteins Better than Others?
The simple answer to this question is, “yes”. Poor quality proteins are low in one or more of the EAAs and likely lower in BCAAs. High quality proteins have high levels of all of the EAAs and BCAAs and are quickly absorbed. The highest quality proteins are from animal sources like milk, eggs, beef, chicken, turkey, pork, fish and cheese. Whey protein (the number one choice of bodybuilders) is derived from plain old milk and it is the highest quality of all proteins. In the last several years, some people have tried to imply that other proteins are in some way superior to whey protein. Perhaps they want to try to sell you a cheaper protein so they can make more profits or perhaps they just want to “be the first one in a new category” in the supplement industry. Unfortunately, they forgot to consider one small thing – the facts!

So what are these “facts”? Let’s start with the basics, whey makes up 20 percent of the protein content of cow’s milk. The other 80 percent is casein. Human mother’s milk is about 60 percent whey, so perhaps it is not surprising that whey is the best choice for humans. Casein clots in the stomach and doesn’t seem to be as beneficial to the digestive tract whereas whey has numerous health benefits1. It has actually been shown to extend the life span of lab animals by 30 percent and guard against environmental toxins and possibly cancers. So whey has quite a following in the “healthy eating” community as well as with bodybuilders and sportsmen.

There have been close to 20 scientific studies looking at the nutritive qualities of whey protein versus other proteins, starting in the early 1900’s. But let’s just start by looking at the two most important studies. The first one compared whey protein to casein for improving exercise performance. When a group of healthy young adults was split up and half were given whey and the other half were given casein, the group that received whey increased both their peak muscular power and 30-second work capacity by 13 percent. These results would definitely impact your ability to lift heavier weights for more reps in the gym! The group that received casein showed no improvements in strength.

The second study looked at both changes in strength and muscle mass in weight-training subjects given the same amount of either whey protein or casein over 10-weeks. The huge result in this study was that the whey protein group gained 11 pounds of muscle but the casein group only gained 1 pound – that’s 11 times more muscle gains with whey! The whey group also lost fat (the casein group gained a bit of fat) and the whey group had better improvements in all the resistance training measurements.

All of this is not surprising considering research clearly demonstrates that whey results in 119 percent greater protein synthesis (muscle building) than casein and has a 96 percent better EAA content than milk protein. Also, research conducted at the Harvard School of Public Health concluded that whey protein delivers 30 percent better protein nutrition than casein. So I would be skeptical about companies that say milk protein isolate or egg or casein is superior to whey. I’m not saying there’s anything wrong with using blends of different proteins but if you only use one type of protein product, it should be whey – especially post workout.