Anabolic steroids, are a class of steroid hormones related to the hormone testosterone. They increase protein synthesis within cells, which results in the buildup of cellular tissue (anabolism), especially in muscles. As the name suggests, anabolic, meaning that they promote anabolism or cell growth. Anabolic steroids stimulate the formation of muscles cells and hence cause an increase in the size of skeletal muscles leading to increased strength. In sport and bodybuilding are used a lot of anabolic steroids. But there are three main steroids that are more effective in bodybuilding that play different roles, namely: Sustanon, Dianabol, and Deca Durabolin. These are the most important compounds that generate a lot of relevance in strength and muscle growth. They are either used on a single basis or combined together to produce better results. 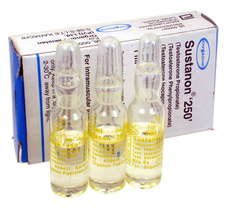 Sustanon is a famous Anabolic steroid, very appreciated by bodybuilders, because, compared with others steroids it is formed by some esthers of testosterone, which has as a result a synergetic effect.

Referring to this composition, the pharmaceutical steroid has some positive qualities which are of great interest for athletes. The action of active chemical substances of Sustanon is preserved for some weeks. The Sustanon steroid starts to have an effect from the day it is injected and it is active up to 3-4 weeks.

The Sustanon steroid is good to be used for strength and muscle mass increase because it has a pronounced androgenic effect combined with the strong anabolic one. The bodybuilders who have problems in retaining liquids and a high level of estrogens prefer to use Sustanon then others testosterones with long effect.

It is essential to know that small quantities of   Sustanon steroid have a benefic action also on well developed athletes.

The dosage to the steroid cycle is always very confusing and if not understood properly, it can lead to major side effects. The Sustanon steroid is injected once a week and the break between the injections can be up to 10 days. The dose for bodybuilders and power-lifters starts by 250mg at every 14 days and gets to the level of more than 1000 mg/week. The dose is usually between 250-1000 mg/week. In most cases there are enough 500mg/week so the doses can be decreased to 250mg of Sustanon/week when it is combined with another steroid. To achieve a fast increase of the muscle weight, Sustanon is usually mixed with Deca-Durabolin steroid or Anapolon steroid , and the athletes that are careful to the qualities of the muscle combine  Sustanon steroid with Parabolan, Winstrol, Oxandrolon or Primobolan steroid.

In the market, there are various brands that are available and it is good to understand and differentiate them, for Sustanon brand names like Organon, Karachi, Infar and Durateston exist. 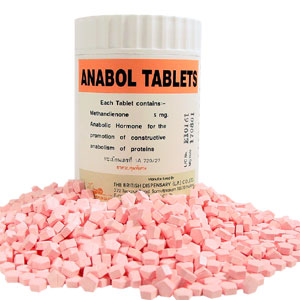 Dianabol is another important oral steroid that also used as an aid to muscle growth by bodybuilders. It has a faster and certain effect: the weight increase with 1-2 kg / week, during the first 6 weeks is supposed to be normal. The user of this steroid experiences water retention on cases when an anti-estrogen is ignored and not taken. The Dianabol steroid dosage is varied, especially for trainees, weightlifters and power lifters; doses oscillates between 2 and 10pillsperday or even much more than that.

The daily dose which has a real positive effect on bodybuilder varies between 15-40 mg. The dosage is always made by the individual peculiarity of the trainee. The beginners will not use more than 15-20 mg a day because this dose is sufficient to obtain good results even after 8-10 weeks. If the steroid effect is diminishing after 8 weeks and the athlete wants to continue the treatment, he doesn’t have to increase the steroid dose. It is better to use an additional injectable steroid.

Dianabol isn’t recommended in the competition trainings, because it provokes in many cases a significant water accumulation. Those who doesn’t have this problem and who are conversant with Nolvadex and Proviron can use in the fats elimination periods Dianabol combined with the Parabolan steroid, Winstrol Depot, Oxandrolon etc. Women who use 10-20 mg a day dose of Dianabol obtain very good results. Women, who are insensitive to side effects such as the virility or the additional flow of androgens, use 2-4 pastilles a day during 4-6weeks.

It is recommended to use Dianabol steroid at least two times a week to obtain the necessary concentration of the active chemical substance in blood, because Dianabol effect lasts 3-5 hours. The scientific investigations observed that the duration of the Dianabol action during the training days is lesser than the rest days and that’s why the best solution would be 3 times a day utilization. Dianabol will be used under the tongue because it has a methyl radical in the17-alfa position; this way the risk of liver disturbances will be decreased. 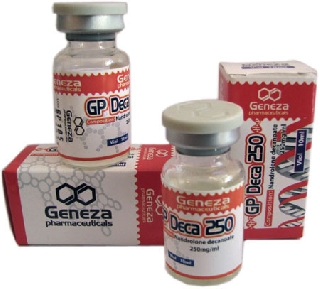 And the last one is the Deca Durabolin steroid. The positive effects of this drug include muscle growth, appetite stimulation and increased red blood cell production and bone density. Deca-Durabolin is the most widespread and most commonly used injectable steroid. Deca-Durabolin causes the muscle cell to store morenitrogen than it releases so that a positive nitrogen balance is achieved. It is known best in adding strength and the entire muscle size in the shortest time as compared to other forms of steroids.

Many athletes notice considerable water retention which, no doubt, is not as distinct as that with injectable testosterones but which in high doses can also cause a smooth and watery appearance. Since Deca also stores more water in the connective tissues, it can temporarily case or even cure existing pain in joints. This is good for those athletes who have problem and pain in the shoulder, elbow, and knee; they can often enjoy pain-free workouts during treatment with Deca-Durabolin. Athletes use Deca, depending on their needs, for muscle buildup and in preparation for a competition.

Deca is suitable, even above average, to develop muscle mass since it promotes the protein synthesis and simultaneously leads to water retention. The optimal dose for this purpose lies between 200 and 600 mg/week. Scientific research has shown that best results can be obtained by the intake of2-mg/pound body weight. Those who take a dose of less than 200 mg/week will usually feel only a very light anabolic effect which, however, increases with a higher dosage.

A lot of male athletes obtain good results by taking 400 mg/week. Steroid novices usually need only 200 mg/week. For achieving better results in muscle buildup it is recommended to combine Deca with Deca Dianabol or Testosterone.