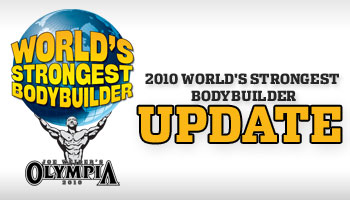 The stage has been set for an epic showdown between Stan “Rhino” Efferding and Ben “Showstopper” White to see which powerhouse will earn the right to call themselves the undisputed 2010 Olympia’s World’s Strongest Bodybuilder! The heated rivalry between these two heavy-hitting plate pushers will come to a thrilling conclusion over a two-day span at Olympia Weekend in Las Vegas where they’ll compete in the ultimate one-on-one clash of the titans.
MORE ABOUT OLYMPIA WEEEKEND 2010

Friday, September 24, will showcase the bench press, and Saturday, September 25, will feature the deadlift. The concept is simple: Whoever lifts the most weight in each respective lift, wins. With $10,000 on the line for the highest combined total, expect both combatants in the WSB to pull out all the stops and make it one of the most talked about events at Olympia Weekend!