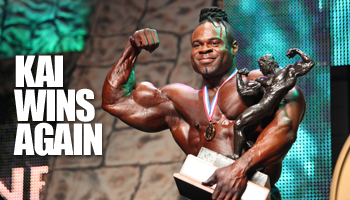 In a decision that brought a roar from the Veterans Memorial Auditorium, Kai Greene was announced the 2010 Arnold Classic defending champion, edging Phil Heath in second, Branch Warren in third, Dexter Jackson in fourth, Toney Freeman in fifth and Ronny Rockel in sixth.

Based on the atmosphere going into tonight’s show, Heath seemed most likely the man to walk away with the winner’s spoils tonight, but in a storyline that didn’t follow form, he took a disappointing 2nd place award.

While Heath was primed and Greene a tad off this morning, Greene seemed to harden up in the evening show. These changes may have been the difference in the end.

Crowd favorite Warren, in addition to winning a fourth Most Muscular award here in Columbus, was third with a physique that was grainy and massive.

Although Jackson dried up from this morning, it wasn’t enough to overcome the early leads built by the three men who finished ahead of him.

Freeman also sharpened up this evening, looking tighter than this morning, and was fairly placed in fifth.

Greene also won the Best Poser award and $10k check that goes with it. In the Arnold Strongman, American Derek Poundstone defeated 6-time champ Zydrunas Savickas in a thrilling frame carry event at the night show. Sylvester Stallone was presented a Lifetime Achievement Award by Arnold Schwarzenegger midway through the proceedings.