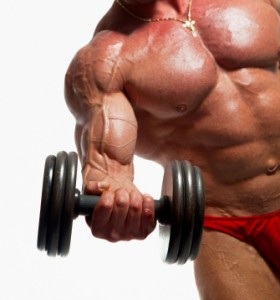 ‘Muscle Building Advice’: Keep a critical eye out for that which can only work for the drug-built bodybuilder.

Have you looked through a hardcopy bodybuilding magazine lately? I’ve recently opened one purely out of curiosity and decided to study the ratio between ads and journalistic/informational content. The percentage of full-page advertisements in the 224-page magazine was about 48%; 109 pages of ads. From counting the number of pages that had content without any ads, I discovered 92 pages; just 41%. The other eleven percent of pages contained some content with ad copy mixed.  Much of what I counted as content was merely photos. A lot of non-photo content was trivial garbage and unconcealed plugs for the unproven product ingredients being displayed on the product ads.

In no other periodical genre do I see such a thing. Unless a “reader” gets motivation by a gander at pictures of pro bodybuilders and reading copy for the latest “get huge” snake oil concoctions, they might as well imbibe the ten-minutes-worth of valuable content while standing at the newsstand, then re-shelve the magazine in good condition.

So what do I mean by “no-nonsense muscle building” information. I’m referring to anything even resembling a valuable bit of wisdom that could help one get bigger, stronger, and shapelier muscles without resorting to drugs. Sadly, most of what you get within the content of these monthly magazines is industry gossip, training routines of steroid-built pros, and opinions by twerps who’ve never picked up anything heavier than their pencils.

Let me give you an example of the opposite of no-nonsense muscle building information. I recently ran across an article in which the writer felt readers could benefit by implementing some of Arnold Schwartzenegger’s training principles. This is nonsense in and of itself. Unless a bodybuilder has the genetics of Arnold and uses the steroid protocol that Arnold used, it’s ridiculous to even consider utilizing his training practices.

But to really drive home the absurdity of this idea, let’s look at one of the recommended techniques. The article says that when Arnold Schwartzenegger had a stubborn body part (that wouldn’t grow), he’d train it more often, going from hitting it once-a-week to twice-a-week. Never mind that in the world of natural bodybuilding, ‘no-nonsense muscle building’ theory says that most bodybuilding plateaus are due to overtraining; we’re in the nonsense-replete world of hardcopy bodybuilding and fitness magazines.  One month they’ll tell you to avoid overtraining and the next month they’ll recommend something that assuredly leads to it.

If we take this nonsensical “Arnold-recommendation” to its logical extension, we’d just double-up on all our workouts. Why not? If simply working a muscle twice as often will stimulate growth where it was previously slow or absent – why not double-up on everything and get super yoked for the effort? Is the writer presupposing that doing so would cause systemic overtraining, but local muscular overtraining won’t occur when doing it for one muscle group? If so, that’s an unexplained assumption or a lack of willingness to think anything out in detail. And it creates the misinformation that’s the root of too many people’s ongoing frustration with natural bodybuilding.

Frankly, I don’t know how these guys stay in business. With the exception of some decent recipes and a few good articles on proper exercise form, they’re practically devoid of no-nonsense muscle building information that wouldn’t have a trainee hitting a progress plateau within a short time. They plaster their pages with drug-built bodybuilders and then have the audacity to manipulate the digital photography in order to accentuate the muscularity of their cover models. It was bad enough when I used to get my bodybuilding information from those pages; It’s worse now, twenty years later.

My advice: If you gain workout motivation from looking at the photos in these magazines, I can’t say there’s anything wrong with that. Just make sure to peruse the muscle building advice surrounding those photos with your rational faculy fully plugged in.